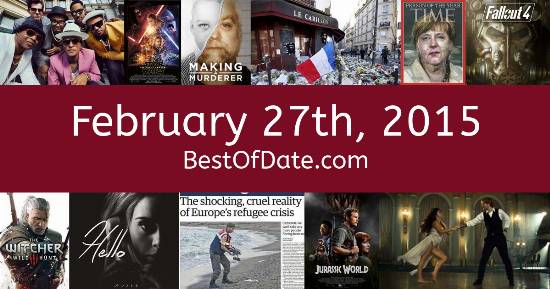 Songs that were on top of the music singles charts in the USA and the United Kingdom on February 27th, 2015.

The date is February 27th, 2015 and it's a Friday. Anyone born today will have the star sign Pisces. Currently, people have "that Friday feeling" and are looking forward to the weekend.

In Ireland, the trial of architect Graham Dwyer for the murder of Elaine O'Hara is currently receiving widespread media attention. The 2015 Cricket World Cup is taking place in Australia and New Zealand. Eddie Redmayne has just won the Academy Award for Best Actor for his role of Stephen Hawking in the movie The Theory of Everything.

Pop star Madonna is in the news after falling off stage while performing at the 2015 Brit Awards. A photograph of "The Dress" has become a viral Internet sensation as people argue over whether the dress is colored "black and blue" or "white and gold". Star Trek actor Leonard Nimoy has passed away at the age of 83.

Disgraced rock singer Gary Glitter has just been sentenced to 16 years in prison for attempted rape and indecent assault. On Netflix, season three of House of Cards has just been released. On TV, people are watching popular shows such as "Bones", "Suits", "American Horror Story" and "Jane the Virgin".

Meanwhile, gamers are playing titles such as "Titanfall", "Watchdogs", "Far Cry 4" and "Dying Light". Kids and teenagers are watching TV shows such as "Lab Rats: Bionic Island", "Dog with a Blog", "Every Witch Way" and "Sheriff Callie's Wild West". If you're a kid or a teenager, then you're probably playing with toys such as the Furby Boom, the PlayStation 4, the Xbox One and Frozen toys.

Celebrities, historical figures and other notable people who were born on February 27th.

Actress. Deceased
Born on February 27th, 1932
She was not alive on this date.

Barack Obama was the President of the United States on February 27th, 2015.

David Cameron was the Prime Minister of the United Kingdom on February 27th, 2015.

Enter your date of birth below to find out how old you were on February 27th, 2015.

Here are some fun statistics about February 27th, 2015.