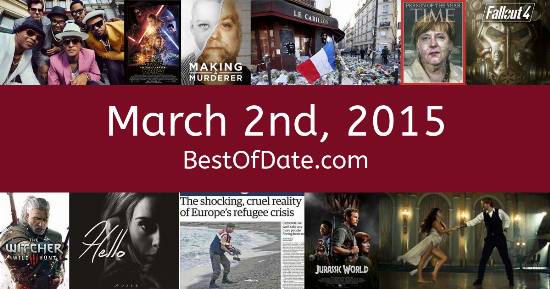 Songs that were on top of the music singles charts in the USA and the United Kingdom on March 2nd, 2015.

The date is March 2nd, 2015 and it's a Monday. Anyone born today will have the star sign Pisces. Spring has started to creep in and the days are beginning to get longer.

In America, the song Uptown Funk by Mark Ronson featuring Bruno Mars is on top of the singles charts. Over in the UK, Love Me like You Do by Ellie Goulding is the number one hit song. Barack Obama is currently the President of the United States and the movie Focus is at the top of the Box Office.

In Ireland, the trial of architect Graham Dwyer for the murder of Elaine O'Hara is currently receiving widespread media attention. The 2015 Cricket World Cup is taking place in Australia and New Zealand. A photograph of "The Dress" has become a viral Internet sensation as people argue over whether the dress is colored "black and blue" or "white and gold".

Star Trek actor Leonard Nimoy has passed away at the age of 83. Disgraced rock singer Gary Glitter has just been sentenced to 16 years in prison for attempted rape and indecent assault. On Netflix, season three of House of Cards has just been released.

Chelsea have just won the 2015 Football League Cup by defeating Tottenham Hotspur 2-0. The world of soccer is in shock following the arrest of Sunderland winger Adam Johnson on suspicion of engaging in sexual activity with a 15-year-old girl. On TV, people are watching popular shows such as "The Vampire Diaries", "Modern Family", "American Horror Story" and "Power".

Meanwhile, gamers are playing titles such as "Titanfall", "Destiny", "Call of Duty: Advanced Warfare" and "Dying Light". Children and teenagers are currently watching television shows such as "The Fairly OddParents", "Phineas and Ferb", "Jake and the Never Land Pirates" and "Austin & Ally". If you're a kid or a teenager, then you're probably playing with toys such as the PlayStation 4 and the Xbox One.

Barack Obama was the President of the United States on March 2nd, 2015.

David Cameron was the Prime Minister of the United Kingdom on March 2nd, 2015.

Enter your date of birth below to find out how old you were on March 2nd, 2015.

Here are some fun statistics about March 2nd, 2015.

Leave a comment and tell everyone why March 2nd, 2015 is important to you.