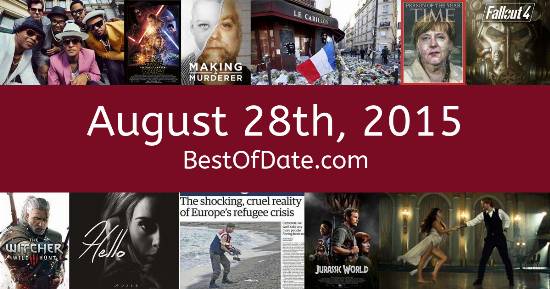 Songs that were on top of the music singles charts in the USA and the United Kingdom on August 28th, 2015.

The movie "Straight Outta Compton" was at the top of the box office on August 28th, 2015.

The date is August 28th, 2015 and it's a Friday. Anyone born today will have the star sign Virgo. Currently, people have "that Friday feeling" and are looking forward to the weekend.

The summer of 2015 is coming to an end and fall is just around the corner. In America, the song Can't Feel My Face by The Weeknd is on top of the singles charts. Over in the UK, Don't Be So Hard on Yourself by Jess Glynne is the number one hit song.

It's 2015, so the music charts are being dominated by the likes of OMI, Bruno Mars, Ellie Goulding, Adele, Justin Bieber and Hozier. Following the release of the movie "Straight Outta Compton", people on the Internet are currently sharing parody images that use the name of their own hometown instead of Compton. Hackers have recently leaked data that they stole from extramarital affairs website Ashley Madison.

On Netflix, the first season of Narcos has been released. On TV, people are watching popular shows such as "The Vampire Diaries", "The Walking Dead", "Power" and "Jane the Virgin". Meanwhile, gamers are playing titles such as "Alien: Isolation", "Far Cry 4", "The Witcher 3: Wild Hunt" and "Batman: Arkham Knight".

Children and teenagers are currently watching television shows such as "Austin & Ally", "Doc McStuffins", "Dog with a Blog" and "Sheriff Callie's Wild West". If you're a kid or a teenager, then you're probably playing with toys such as the PlayStation 4 and the Xbox One.

Barack Obama was the President of the United States on August 28th, 2015.

David Cameron was the Prime Minister of the United Kingdom on August 28th, 2015.

Enter your date of birth below to find out how old you were on August 28th, 2015.

Leave a comment and tell everyone why August 28th, 2015 is important to you.