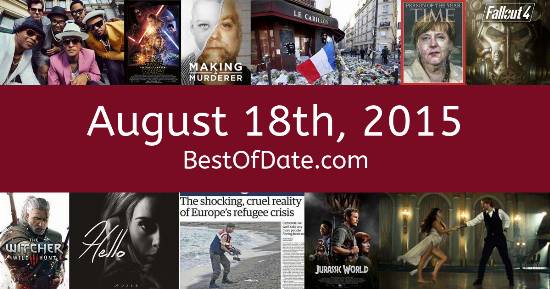 Songs that were on top of the music singles charts in the USA and the United Kingdom on August 18th, 2015.

The movie "Straight Outta Compton" was at the top of the box office on August 18th, 2015.

The date is August 18th, 2015 and it's a Tuesday. Anyone born today will have the star sign Leo. It's summer, so the temperatures are warmer and the evenings are longer than usual.

In America, the song Cheerleader by OMI is on top of the singles charts. Over in the UK, Drag Me Down by One Direction is the number one hit song. Barack Obama is currently the President of the United States and the movie Straight Outta Compton is at the top of the Box Office.

Rap star Dr. Dre has just released his new album Compton. Following the release of the movie "Straight Outta Compton", people on the Internet are currently sharing parody images that use the name of their own hometown instead of Compton. Hackers have recently leaked data that they stole from extramarital affairs website Ashley Madison.

Celebrities, historical figures and notable people who were born on the 18th of August.

Barack Obama was the President of the United States on August 18th, 2015.

David Cameron was the Prime Minister of the United Kingdom on August 18th, 2015.

Enter your date of birth below to find out how old you were on August 18th, 2015.