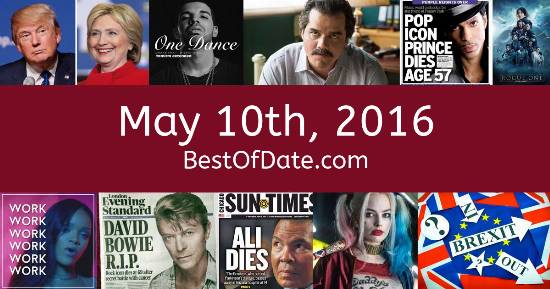 Songs that were on top of the music singles charts in the USA and the United Kingdom on May 10th, 2016.

Burton had to step down. Her party was absolutely decimated in the 2016 election. She was very lucky to retain her own seat. Labour still haven't recovered.
Posted on May 10th, 2022 12:15

The date is May 10th, 2016 and it's a Tuesday. Anyone born today will have the star sign Taurus. The summer of 2016 has finally arrived. The weather has warmed up and the evenings are brighter than usual.

In America, the song Panda by Desiigner is on top of the singles charts. Over in the UK, One Dance by Drake is the number one hit song. Barack Obama is currently the President of the United States and the movie Captain America: Civil War is at the top of the Box Office.

In the United Kingdom, David Cameron is the current Prime Minister. It's 2016, so the music charts are being dominated by artists such as Drake, Lukas Graham, Sia, Mike Posner, The Chainsmokers and Calvin Harris. In England, underdogs Leicester City have just been crowned as Premier League champions, despite being 5000-to-1 odds at the start of the season.

In US politics, billionaire Donald Trump has recently become the presumptive nominee of the Republican Party for the 2016 US presidential election. Meanwhile, rapper 50 Cent is currently being criticized for uploading an Instagram video of himself making fun of an autistic teenager at an airport in Cincinatti. The lyrics to Beyonce's latest song "Sorry" are currently sparking intrigue, as social media users argue over who they think "Becky with the good hair" is. Rodrigo Duterte has become the new President of the Philippines.

In Irish politics, Joan Burton has just stepped down as leader of the Labour party following a disastrous performance in the 2016 general election. If you were to travel back to this day, notable figures such as Muhammad Ali, Kimbo Slice, Christina Grimmie and Fidel Castro would all be still alive. On TV, people are watching popular shows such as "Modern Family", "Black Mirror", "Jane the Virgin" and "Making a Murderer".

Meanwhile, gamers are playing titles such as "Lego Jurassic World", "Call of Duty: Black Ops III", "Halo 5: Guardians" and "Uncharted 4: A Thief's End". Kids and teenagers are watching TV shows such as "Mickey Mouse Clubhouse", "Horrid Henry", "Paw Patrol" and "Nicky, Ricky, Dicky & Dawn". If you're a kid or a teenager, then you're probably playing with toys such as the PlayStation 4, the Xbox One, Barbie Saddle n Ride and Star Wars BB-8 toy droid.

Notable events that occurred around May 10th, 2016.

Barack Obama was the President of the United States on May 10th, 2016.

David Cameron was the Prime Minister of the United Kingdom on May 10th, 2016.