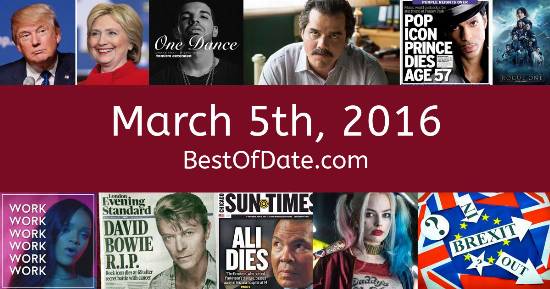 Songs that were on top of the music singles charts in the USA and the United Kingdom on March 5th, 2016.

The date is March 5th, 2016 and it's a Saturday. Anyone born today will have the star sign Pisces. Currently, people are enjoying their weekend.

Spring has started to creep in and the days are beginning to get longer. In America, the song Work by Rihanna featuring Drake is on top of the singles charts. Over in the UK, 7 Years by Lukas Graham is the number one hit song.

Barack Obama is currently the President of the United States and the movie Deadpool is at the top of the Box Office. In the United Kingdom, David Cameron is the current Prime Minister. It's 2016, so the music charts are being dominated by artists such as Drake, Lukas Graham, Sia, Mike Posner, The Chainsmokers and Calvin Harris.

In England, soccer player Adam Johnson has recently been found guilty of sexual activity with a child. Nate Diaz has defeated Conor McGregor after a round two submission at UFC 196. On TV, people are watching popular shows such as "The Walking Dead", "Black Mirror", "Rick and Morty" and "Jane the Virgin".

Meanwhile, gamers are playing titles such as "Call of Duty: Black Ops III", "Just Cause 3", "XCOM 2" and "Firewatch". Children and teenagers are currently watching television shows such as "Mickey Mouse Clubhouse", "Sheriff Callie's Wild West", "Girl Meets World" and "Henry Danger". If you're a kid or a teenager, then you're probably playing with toys such as the PlayStation 4, the Xbox One and Star Wars BB-8 toy droid.

A Spotify playlist of songs from 2014. Let us take you back to the peak days of Desiigner, Sia, Drake and The Chainsmokers.

Barack Obama was the President of the United States on March 5th, 2016.

David Cameron was the Prime Minister of the United Kingdom on March 5th, 2016.

Enter your date of birth below to find out how old you were on March 5th, 2016.

Here are some fun statistics about March 5th, 2016.

Leave a comment and tell everyone why March 5th, 2016 is important to you.