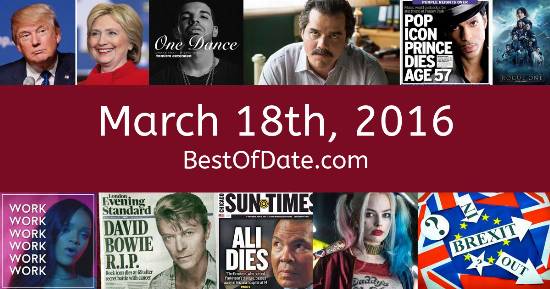 These songs were on top of the music charts in the United States and the United Kingdom on March 18th, 2016.

The date is March 18th, 2016, and it's a Friday. Anyone born today will have the star sign Pisces. Currently, people have "that Friday feeling" and are looking forward to the weekend.

Spring has arrived and the days have become longer. St. Patrick's Day of 2016 has recently come and gone. In America, the song Work by Rihanna featuring Drake is on top of the singles charts.

Over in the UK, 7 Years by Lukas Graham is the number one hit song. Barack Obama is currently the President of the United States, and the movie Zootopia is at the top of the Box Office. In the United Kingdom, David Cameron is the current Prime Minister.

It's 2016, so the music charts are being dominated by artists such as Drake, Lukas Graham, Sia, Mike Posner, The Chainsmokers and Calvin Harris. The 2016 Republican Party presidential primaries have become a three-horse race between Donald Trump, Ted Cruz and John Kasich. Meanwhile, Hillary Clinton and Bernie Sanders are battling it out to become the presidential nominee for the Democratic Party. Tributes are pouring in for British magician Paul Daniels, who has recently passed away after battling a brain tumour.

If you were to travel back to this day, notable figures such as Rob Ford, Johan Cruyff, Chyna and Prince would all be still alive. On TV, people are watching popular shows such as "Grey's Anatomy", "Black Mirror", "Orange Is the New Black" and "Power". Meanwhile, gamers are playing titles such as "Batman: Arkham Knight", "Star Wars Battlefront", "The Witness" and "XCOM 2".

Kids and teenagers are watching TV shows such as "Dora the Explorer", "The Fairly OddParents", "Henry Danger" and "Game Shakers". If you're a kid or a teenager, then you're probably playing with toys such as the PlayStation 4, the Xbox One, Barbie Saddle n Ride and Star Wars BB-8 toy droid.

These are trending news stories and fads that were prevalent at this time. These are topics that would have been in the media on March 18th, 2016.

Check out our personality summary for people who were born on March 18th, 2016.

Barack Obama was the President of the United States on March 18th, 2016.

David Cameron was the Prime Minister of the United Kingdom on March 18th, 2016.

Enter your date of birth below to find out how old you were on March 18th, 2016.
This information is not transmitted to our server.