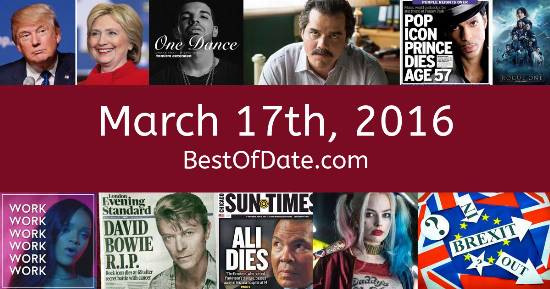 These songs were on top of the music charts in the United States and the United Kingdom on March 17th, 2016.

The date is March 17th, 2016, and it's a Thursday. Anyone born today will have the star sign Pisces. Spring has arrived and the days have become longer.

It's St. Patrick's Day, which means that a sizeable amount of people are spending their day in bars. Parades are being held in major cities throughout the world. In America, the song Work by Rihanna featuring Drake is on top of the singles charts. Over in the UK, 7 Years by Lukas Graham is the number one hit song.

The 2016 Republican Party presidential primaries have become a three-horse race between Donald Trump, Ted Cruz and John Kasich. Meanwhile, Hillary Clinton and Bernie Sanders are battling it out to become the presidential nominee for the Democratic Party. Tributes are pouring in for British magician Paul Daniels, who has recently passed away after battling a brain tumour. If you were to travel back to this day, notable figures such as Rob Ford, Johan Cruyff, Chyna and Prince would all be still alive.

On TV, people are watching popular shows such as "The Walking Dead", "Homeland", "Black Mirror" and "Black-ish". Meanwhile, gamers are playing titles such as "The Sims 4", "Metal Gear Solid V: The Phantom Pain", "Star Wars Battlefront" and "Tom Clancy's The Division". Children and teenagers are currently watching television shows such as "Jake and the Never Land Pirates", "The Thundermans", "Sheriff Callie's Wild West" and "Game Shakers".

These are trending news stories and fads that were prevalent at this time. These are topics that would have been in the media on March 17th, 2016.

News stories and other events that happened around March 17th, 2016.

Check out our personality summary for people who were born on March 17th, 2016.

Wrestler. Deceased
Born on March 17th, 1975
He was not alive on this date.

Barack Obama was the President of the United States on March 17th, 2016.

David Cameron was the Prime Minister of the United Kingdom on March 17th, 2016.

Find out what your age was on March 17th, 2016, by entering your DOB below.
This information is not saved on our server.