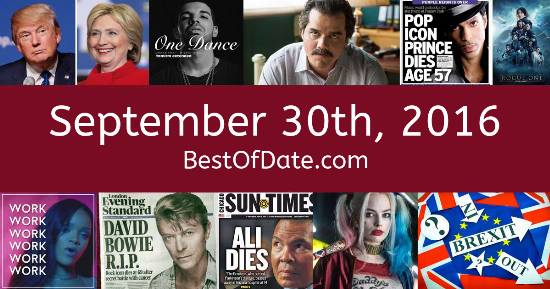 Songs that were on top of the music singles charts in the USA and the United Kingdom on September 30th, 2016.

The movie "The Magnificent Seven" was at the top of the box office on September 30th, 2016.

The date is September 30th, 2016 and it's a Friday. Anyone born today will have the star sign Libra. Currently, people have "that Friday feeling" and are looking forward to the weekend.

Schools have started back and autumn has arrived, so temperatures have started to cool and trees are beginning to shed their leaves. The earthy smells of fall have started to fill the air. The song Closer by The Chainsmokers is on top of the singles charts in both the USA and the United Kingdom.

Barack Obama is currently the President of the United States and the movie The Magnificent Seven is at the top of the Box Office. In the United Kingdom, Theresa May is the current Prime Minister. It's 2016, so the music charts are being dominated by artists such as Drake, Lukas Graham, Sia, Mike Posner, The Chainsmokers and Calvin Harris.

The 2016 United States presidential election is in full swing, with Hillary Clinton facing off against Donald Trump. On Netflix, the second season of Narcos has just been released. A video clip of Danielle Bregoli shouting "Catch me outside, how about that?" is going viral as social media users repeatedly mimic her catch phrase.

Hollywood actress Angelina Jolie has filed for divorce from Brad Pitt after a twelve-year relationship. LazyTown actor Stefán Karl Stefánsson has recently announced that he has been diagnosed with cancer. Democratic nominee Hillary Clinton and the Republican nominee Donald Trump have just held their first presidential debate. 84 million people tuned in to watch it.

On TV, people are watching popular shows such as "Game of Thrones", "Suits", "Rick and Morty" and "Power". Meanwhile, gamers are playing titles such as "Lego Star Wars: The Force Awakens", "Pokemon Go", "Deus Ex: Mankind Divided" and "Forza Horizon 3". Kids and teenagers are watching TV shows such as "The Fairly OddParents", "Mickey Mouse Clubhouse", "Jake and the Never Land Pirates" and "Henry Danger".

Barack Obama was the President of the United States on September 30th, 2016.

Theresa May was the Prime Minister of the United Kingdom on September 30th, 2016.

Enter your date of birth below to find out how old you were on September 30th, 2016.

Here are some fun statistics about September 30th, 2016.

Leave a comment and tell everyone why September 30th, 2016 is important to you.