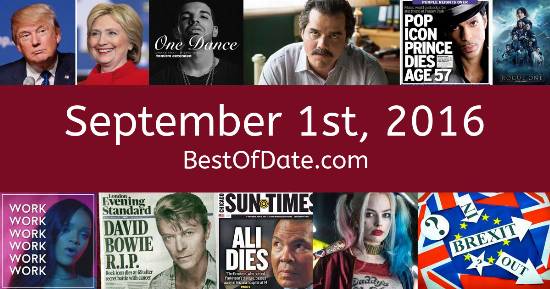 Songs that were on top of the music singles charts in the USA and the United Kingdom on September 1st, 2016.

The date is September 1st, 2016 and it's a Thursday. Anyone born today will have the star sign Virgo. Schools have started back and autumn has arrived, so temperatures have started to cool and trees are beginning to shed their leaves.

In America, the song Cheap Thrills by Sia is on top of the singles charts. Over in the UK, Cold Water by Major Lazer featuring Justin Bieber is the number one hit song. Barack Obama is currently the President of the United States and the movie Don't Breathe is at the top of the Box Office.

Former congressman Anthony Weiner is in the news again following another sexting scandal. Following recent reports that Weiner "sexted" another woman, his wife Huma Abedin has announced that the couple will be separating. If you were to travel back to this day, notable figures such as Fidel Castro, Big Syke, George Michael and Carrie Fisher would all be still alive. On TV, people are watching popular shows such as "Bones", "Modern Family", "Better Call Saul" and "Stranger Things".

Meanwhile, gamers are playing titles such as "Grand Theft Auto V", "Tom Clancy's The Division", "Inside" and "Pokemon Go". Kids and teenagers are watching TV shows such as "Dora the Explorer", "Mickey Mouse Clubhouse", "Doc McStuffins" and "Bunnicula". If you're a kid or a teenager, then you're probably playing with toys such as the PlayStation 4, Barbie Saddle n Ride, Star Wars BB-8 toy droid and L.O.L. Surprise!.

American country singer. Deceased
Born on September 1st, 1933
He was not alive on this date.

Wrestler. Deceased
Born on September 1st, 1961
He was not alive on this date.

Barack Obama was the President of the United States on September 1st, 2016.

Theresa May was the Prime Minister of the United Kingdom on September 1st, 2016.

Enter your date of birth below to find out how old you were on September 1st, 2016.

Here are some fun statistics about September 1st, 2016.

Have something to say about September 1st, 2016?