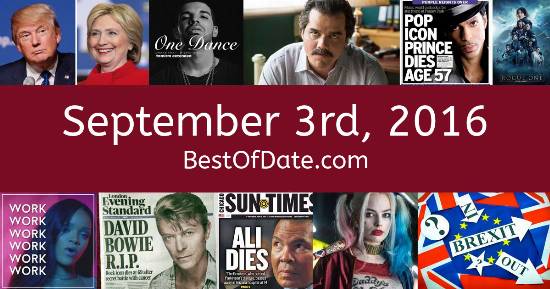 Songs that were on top of the music singles charts in the USA and the United Kingdom on September 3rd, 2016.

The date is September 3rd, 2016 and it's a Saturday. Anyone born today will have the star sign Virgo. Currently, people are enjoying their weekend.

Schools have started back and autumn has arrived, so temperatures have started to cool and trees are beginning to shed their leaves. In America, the song Closer by The Chainsmokers is on top of the singles charts. Over in the UK, Cold Water by Major Lazer featuring Justin Bieber is the number one hit song.

Barack Obama is currently the President of the United States and the movie Don't Breathe is at the top of the Box Office. In the United Kingdom, Theresa May is the current Prime Minister. It's 2016, so the music charts are being dominated by artists such as Drake, Lukas Graham, Sia, Mike Posner, The Chainsmokers and Calvin Harris.

The 2016 United States presidential election is in full swing, with Hillary Clinton facing off against Donald Trump. Former congressman Anthony Weiner is in the news again following another sexting scandal. Following recent reports that Weiner "sexted" another woman, his wife Huma Abedin has announced that the couple will be separating. On Netflix, the second season of Narcos has just been released.

If you were to travel back to this day, notable figures such as Fidel Castro, Big Syke, George Michael and Carrie Fisher would all be still alive. On TV, people are watching popular shows such as "Prison Break", "The Vampire Diaries", "House of Cards" and "Stranger Things". Meanwhile, gamers are playing titles such as "Batman: Arkham Knight", "Rocket League", "Metal Gear Solid V: The Phantom Pain" and "Inside".

Celebrities, historical figures and other notable people who were born on September 3rd.

Barack Obama was the President of the United States on September 3rd, 2016.

Theresa May was the Prime Minister of the United Kingdom on September 3rd, 2016.

Enter your date of birth below to find out how old you were on September 3rd, 2016.

Here are some fun statistics about September 3rd, 2016.

Have something to say about September 3rd, 2016?