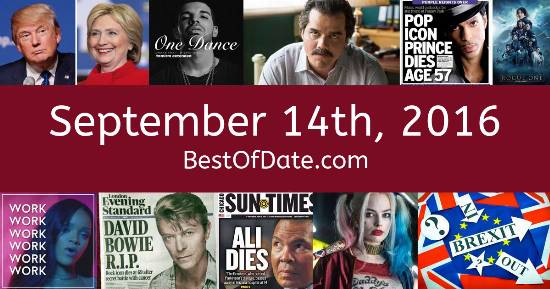 Songs that were on top of the music singles charts in the USA and the United Kingdom on September 14th, 2016.

The date is September 14th, 2016 and it's a Wednesday. Anyone born today will have the star sign Virgo. Schools have started back and autumn has arrived, so temperatures have started to cool and trees are beginning to shed their leaves.

It's 2016, so the music charts are being dominated by artists such as Drake, Lukas Graham, Sia, Mike Posner, The Chainsmokers and Calvin Harris. The 2016 United States presidential election is in full swing, with Hillary Clinton facing off against Donald Trump. On Netflix, the second season of Narcos has just been released.

If you were to travel back to this day, notable figures such as Fidel Castro, Big Syke, George Michael and Carrie Fisher would all be still alive. On TV, people are watching popular shows such as "RuPaul's Drag Race", "The Walking Dead", "Game of Thrones" and "Suits". Meanwhile, gamers are playing titles such as "Minecraft", "Cities: Skylines", "Tom Clancy's The Division" and "Pokemon Go".

Children and teenagers are currently watching television shows such as "The Fairly OddParents", "Doc McStuffins", "Paw Patrol" and "Game Shakers". Popular toys at the moment include the likes of the Xbox One, Barbie Saddle n Ride, Star Wars BB-8 toy droid and L.O.L. Surprise!.

Singer. Deceased
Born on September 14th, 1983
She was not alive on this date.

Barack Obama was the President of the United States on September 14th, 2016.

Theresa May was the Prime Minister of the United Kingdom on September 14th, 2016.

Enter your date of birth below to find out how old you were on September 14th, 2016.

Here are some fun statistics about September 14th, 2016.