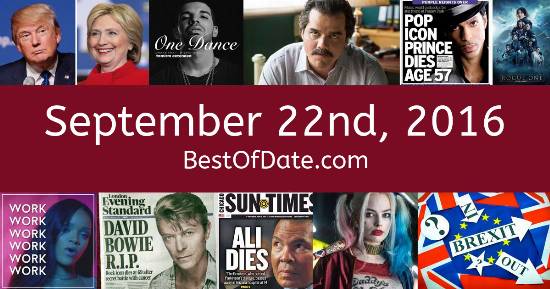 These songs were on top of the music charts in the United States and the United Kingdom on September 22nd, 2016.

The top "Box Office" movie on this date was the film "Sully".

The date is September 22nd, 2016, and it's a Thursday. Anyone born today will have the star sign Virgo. Schools and colleges are starting again and Autumn has officially arrived. As a result, temperatures are beginning to cool and trees are starting to shed their leaves.

The earthy smells of fall have started to fill the air. The song Closer by The Chainsmokers is on top of the singles charts in both the USA and the United Kingdom. Barack Obama is currently the President of the United States, and the movie Sully is at the top of the Box Office.

On Netflix, the second season of Narcos has just been released. A video clip of Danielle Bregoli shouting "Catch me outside, how about that?" is going viral as social media users repeatedly mimic her catch phrase. 31 people have been injured after three bombs exploded in Seaside Park, New Jersey, and Manhattan.

Hollywood actress Angelina Jolie has filed for divorce from Brad Pitt after a twelve-year relationship. LazyTown actor Stefán Karl Stefánsson has recently announced that he has been diagnosed with cancer. If you were to travel back to this day, notable figures such as Fidel Castro, Big Syke, George Michael and Carrie Fisher would all be still alive.

On TV, people are watching popular shows such as "Game of Thrones", "Once Upon a Time", "Gotham" and "Narcos - Season 2". Meanwhile, gamers are playing titles such as "Minecraft", "Cities: Skylines", "Call of Duty: Black Ops III" and "Rise of the Tomb Raider". Children and teenagers are currently watching television shows such as "Dora the Explorer", "The Fairly OddParents", "Agents of S.H.I.E.L.D." and "Sheriff Callie's Wild West".

Popular toys at the moment include the likes of the PlayStation 4, the Xbox One, Barbie Saddle n Ride and L.O.L. Surprise!.

These are trending news stories and fads that were prevalent at this time. These are topics that would have been in the media on September 22nd, 2016.

Check out our personality summary for people who were born on September 22nd, 2016.

Television shows that people were watching in September, 2016.

Popular video games that people were playing in September of 2016.

Barack Obama was the President of the United States on September 22nd, 2016.

Theresa May was the Prime Minister of the United Kingdom on September 22nd, 2016.

Enter your date of birth below to find out how old you were on September 22nd, 2016.
This information is not transmitted to our server.

Here are some fun statistics about September 22nd, 2016.