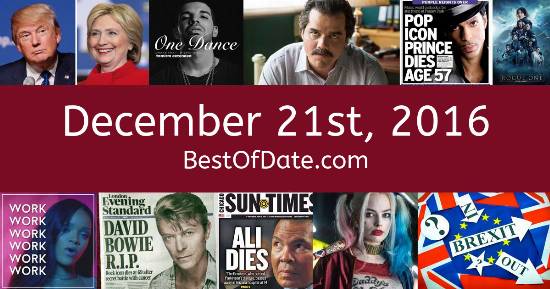 Songs that were on top of the music singles charts in the USA and the United Kingdom on December 21st, 2016:

The date is December 21st, 2016 and it's a Wednesday. Anyone born today will have the star sign Sagittarius. Christmas Day of 2016 is fast approaching and the excitement is building. Department stores are thronged with Christmas shoppers.

In America, the song Black Beatles by Rae Sremmurd is on top of the singles charts. Over in the UK, Rockabye by Clean Bandit featuring Sean Paul is the number one hit song. Barack Obama is currently the President of the United States and the movie Rogue One: A Star Wars Story is at the top of the Box Office.

A viral trend called the "Mannequin Challenge" has become popular online. On the Internet, people are making memes and statuses about how terrible 2016 has been. Sundance Head has just won the eleventh season of The Voice.

Apple have just released "AirPods", which are a wireless set of bluetooth earbuds. Social media is reacting to news that Rob Kardashian and model Blac Chyna have announced that they are splitting up. The Russian ambassador to Turkey, Andrei Karlov, has just been assassinated by an off-duty police officer.

People are watching popular TV shows such as "The Vampire Diaries", "Orange Is the New Black", "Rick and Morty" and "Better Call Saul". Meanwhile, gamers are playing titles such as "Forza Horizon 3", "Mafia III", "Civilization VI" and "Battlefield 1". Kids and teenagers are watching TV shows such as "Dora the Explorer", "Doc McStuffins", "Girl Meets World" and "Henry Danger".

Popular toys include the likes of "PlayStation 4", "Xbox One", "Star Wars BB-8 toy droid" and "Hatchimals".

Who was the Prime Minister of the United Kingdom on December 21st, 2016?

Enter your date of birth below to find out how old you were on December 21st, 2016.

Looking for some nostalgia? Here are some Youtube videos relating to December 21st, 2016. Please note that videos are automatically selected by Youtube and that results may vary! Click on the "Load Next Video" button to view the next video in the search playlist. In many cases, you'll find episodes of old TV shows, documentaries, music videos and soap dramas.

Here are some fun statistics about December 21st, 2016.