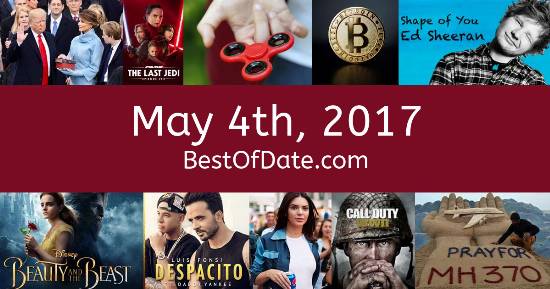 Songs that were on top of the music singles charts in the USA and the United Kingdom on May 4th, 2017.

The date is May 4th, 2017, and it's a Thursday. Anyone born today will have the star sign Taurus. The summer of 2017 has finally arrived. The weather has warmed up and the evenings are brighter than usual.

In America, the song Shape of You by Ed Sheeran is on top of the singles charts. Over in the UK, Symphony by Clean Bandit is the number one hit song. Donald Trump is currently the President of the United States, and the movie The Fate of the Furious is at the top of the Box Office.

In the United Kingdom, Theresa May is the current Prime Minister. It's 2017, so the music charts are being dominated by artists such as Ed Sheeran, Luis Fonsi, Bruno Mars, Kendrick Lamar, The Chainsmokers, Migos, Sam Hunt and Post Malone. The run-up to the 2017 French presidential election is currently taking place, with Emmanuel Macron squaring off against Marine Le Pen.

Details have been emerging about a fraudulent luxury music festival called "Fyre Festival". The festival, which was promoted by rapper Ja Rule, recently fell apart due to issues with security, food and accommodation. A toy called the "fidget spinner" is becoming a worldwide sensation. If you were to travel back to this day, notable figures such as Big Black, Chris Cornell, Roger Moore and Adam West would all be still alive.

On TV, people are watching popular shows such as "American Horror Story", "Rick and Morty", "Power" and "Black-ish". Meanwhile, gamers are playing titles such as "Mafia III", "Resident Evil 7: Biohazard", "Horizon Zero Dawn" and "What Remains of Edith Finch". Children and teenagers are currently watching television shows such as "Dora the Explorer", "Agents of S.H.I.E.L.D.", "Henry Danger" and "Nicky, Ricky, Dicky & Dawn".

Popular toys at the moment include the likes of the PlayStation 4, the Xbox One, L.O.L. Surprise! and Fidget spinners.

These are trending news stories and fads that were prevalent at this time. These are topics that would have been in the media on May 4th, 2017.

Notable events that happened close to May 4th, 2017.

Check out our personality summary for people who were born on May 4th, 2017.

Television shows that people were watching in May, 2017.

Popular video games that people were playing in May of 2017.

Actress. Deceased
Born on May 4th, 1929
She was not alive on this date.

Donald Trump was the President of the United States on May 4th, 2017.

Theresa May was the Prime Minister of the United Kingdom on May 4th, 2017.

Enter your date of birth below to find out how old you were on May 4th, 2017.
This information is not transmitted to our server.