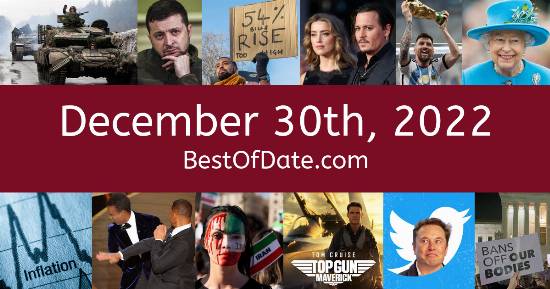 My only connection to Barbara Walters (assuming I can even call it that), I was writing a novel for some contest years ago (late teens, early 20s I want to say?) and I recall I wanted to briefly mention Barbara Walters in the story, so I remember asking around about if or not it okay to mention real-live people in fictional material on Yahoo! Answers (the pre-Reddit days) and one of the answers I got was, "it's okay to mention public figures in your stories" or something to that effect. I liked how the user called Barbara a public figure. I mean, I knew she was. It's just that the term "public figure" was fascinating and interesting to me.
Posted on January 1st, 2023 16:11

I'll never forget Bryan Kohberger's arrest. At the time, it felt like the Idaho murders were going to become a cold case.
Posted on January 4th, 2023 12:14

Bryan Kohberger's arrest and the Idaho murders is going to be something that will be made into a juicy but an episode too long Hulu mini series in a couple of years time.
Posted on January 4th, 2023 17:15

Check out our personality summary for people who were born on December 30th, 2022.

Television shows that people were watching in December, 2022.

Toys and games that were popular on this date in 2022.

Celebrities, historical figures, and other notable people who were born on December 30th.

Joe Biden was the President of the United States on December 30th, 2022.

Rishi Sunak was the Prime Minister of the United Kingdom.

Enter your date of birth below to find out how old you were on December 30th, 2022.
This information is not transmitted to our server.

Here are some fun statistics about December 30th, 2022.