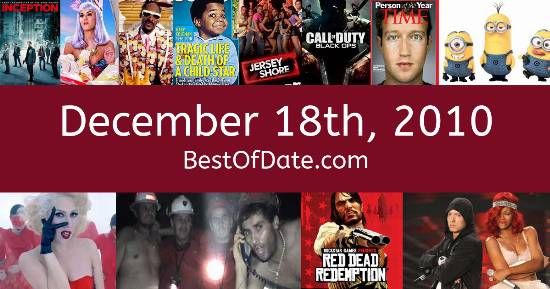 Songs that were on top of the music singles charts in the USA and the United Kingdom on December 18th, 2010.

The date is December 18th, 2010 and it's a Saturday. Anyone born today will have the star sign Sagittarius. Currently, people are enjoying their weekend.

The Christmas season of 2010 is in full swing. The decorations are up and festive songs are playing on the radio. In America, the song Raise Your Glass by Pink is on top of the singles charts. Over in the UK, The Time by Black Eyed Peas is the number one hit song.

Barack Obama is currently the President of the United States and the movie Tron Legacy is at the top of the Box Office. In the United Kingdom, David Cameron is the current Prime Minister. The term "hipster" is currently growing in use. The word is being used to describe people who are pretentious and deliberately anti-mainstream.

Matt Cardle has been crowned as the winner of seventh season of The X Factor. In music news, rapper Ja Rule has been just been sentenced to two years in prison for attempted possession of a weapon. Meanwhile, wrestling star Hulk Hogan has recently tied the knot with his second wife Jennifer McDaniel.

People on the Internet are using the phrase "That Really Rustled My Jimmies" to express their annoyance at things. Anti-government street demonstrations are taking place in Tunisia following the the self-immolation of a man called Mohamed Bouazizi. The protests have been caused by high unemployment and the cost of food. If you were to travel back to this day, notable figures such as Pete Postlethwaite, Nate Dogg, Elizabeth Taylor and Randy Savage would all be still alive.

If you're a kid or a teenager, then you're probably playing with toys such as the Xbox 360, the PlayStation 3, Iggle Piggle and the KidiZoom Camera.

If you are looking for some childhood nostalgia, then check out December 18th, 2016 instead.

Barack Obama was the President of the United States on December 18th, 2010.

David Cameron was the Prime Minister of the United Kingdom on December 18th, 2010.

Enter your date of birth below to find out how old you were on December 18th, 2010.

Here are some fun statistics about December 18th, 2010.