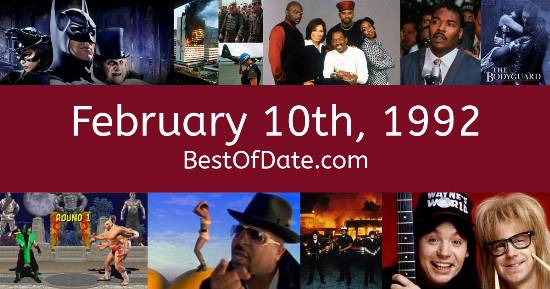 Songs that were on top of the music singles charts in the USA and the United Kingdom on February 10th, 1992:

The date is February 10th, 1992 and it's a Monday. Anyone born today will have the star sign Aquarius. Valentine's Day is just around the corner.

In America, the song I'm Too Sexy by Right Said Fred is on top of the singles charts. Over in the UK, Goodnight Girl by Wet Wet Wet is the number one hit song. George W. Bush Snr. is currently the President of the United States and the movie Medicine Man is at the top of the Box Office.

It's 1992, so radio stations are being dominated by the likes of Kris Kross, Boyz II Men, Whitney Houston, Sir Mix-a-Lot, Right Said Fred, Snap! and Nirvana. The trial of four police officers for the beating of Rodney King back in March of 1991 has recently started in Simi Valley, California. In Venezuela, Major Hugo Chávez has just been arrested after leading a failed coup attempt against President Carlos Andrés Pérez.

In soccer, Kevin Keegan has just become the new manager of English side Newcastle United. In Milwaukee, the trial of suspected serial killer Jeffrey Dahmer is still ongoing. Dahmer has been charged with four counts of first-degree murder. New Hip-Hop duo Kris Kross have just released their debut song "Jump".

In the Netherlands, the Maastricht Treaty has been signed. The signing of this treaty has founded the European Union (EU). The treaty will come into effect on the 1st of November, 1993. In France, the 1992 Winter Olympics are currently taking place in Albertville. Boxer Mike Tyson has recently been found guilty of the rape of 18-year-old Desiree Washington in Indiana. He is currently awaiting sentencing.

The Democratic Party presidential primaries have kicked off in Iowa. Bill Clinton, Jerry Brown, Tom Harkin and Paul Tsongas are among those hoping to become the Democratic Party's nominee for this year's election against George H. W. Bush. On TV, people are watching popular shows such as "The Golden Girls", "Full House", "Star Trek: The Next Generation" and "The Ren & Stimpy Show". Meanwhile, gamers are playing titles such as "Streets of Rage", "F-16 Combat Pilot", "Super Castlevania IV" and "Street Fighter II: The World Warrior".

Kids and teenagers are watching TV shows such as "Growing Pains", "Pingu", "Fireman Sam" and "The Ren & Stimpy Show". If you're a kid or a teenager, then you're probably playing with toys such as "Easy-Bake Oven", "Game Boy", "G.I. Joe (figures)" and "The Super Nintendo Entertainment System (SNES)".

Who was the Prime Minister of the United Kingdom on February 10th, 1992?

Enter your date of birth below to find out how old you were on February 10th, 1992.

Looking for some nostalgia? Here are some Youtube videos relating to February 10th, 1992. Please note that videos are automatically selected by Youtube and that results may vary! Click on the "Load Next Video" button to view the next video in the search playlist. In many cases, you'll find episodes of old TV shows, documentaries, music videos and soap dramas.

Here are some fun statistics about February 10th, 1992.