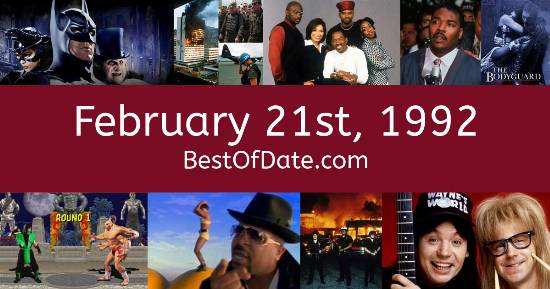 Songs that were on top of the music singles charts in the USA and the United Kingdom on February 21st, 1992.

The date is February 21st, 1992 and it's a Friday. Anyone born today will have the star sign Pisces. Currently, people have "that Friday feeling" and are looking forward to the weekend.

Boxer Mike Tyson has recently been found guilty of the rape of 18-year-old Desiree Washington in Indiana. He is currently awaiting sentencing. In Ireland, Albert Reynolds has become the new Taoiseach. His appointment follows the recent resignation of Fianna Fail leader Charles Haughey over a phone-tapping scandal. The trial of four police officers for the 1991 beating of Rodney King back is currently taking in Simi Valley, California.

The comedy film "Wayne's World", starring Mike Myers, is currently showing in movie theaters. In Milwaukee, serial killer Jeffrey Dahmer has just been found guilty and sentenced to life in prison. In music, Mötley Crüe lead singer Vince Neil has recently left the band to focus on a career in race car driving.

The UN Security Council has approved plans to send a UN peacekeeping force into Yugoslavia. If you were to travel back to this day, notable figures such as Robert Reed, Anthony Perkins, Audrey Hepburn and Thurgood Marshall would all be still alive. On TV, people are watching popular shows such as "Murder, She Wrote", "Married... with Children", "Family Matters" and "Step by Step".

Meanwhile, gamers are playing titles such as "Paperboy", "The Simpsons: Bart vs. the Space Mutants", "Streets of Rage" and "Super Castlevania IV". Children and teenagers are currently watching television shows such as "Alvin and the Chipmunks", "Pingu", "Chip 'n' Dale's Rescue Rangers" and "Dink, the Little Dinosaur". Popular toys at the moment include the likes of the Easy-Bake Oven, Teenage Mutant Hero Turtles figures, Polly Pocket and Lego Pirates.

If you are looking for some childhood nostalgia, then check out February 21st, 1998 instead.

George W. Bush Snr. was the President of the United States on February 21st, 1992.

John Major was the Prime Minister of the United Kingdom on February 21st, 1992.

Enter your date of birth below to find out how old you were on February 21st, 1992.

Here are some fun statistics about February 21st, 1992.