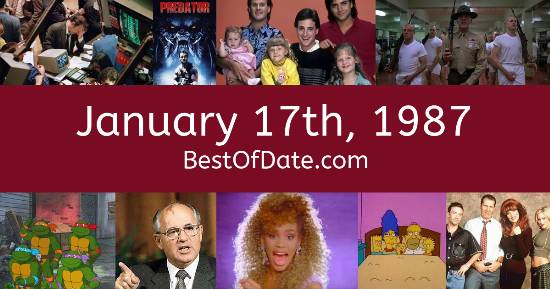 Songs that were on top of the music singles charts in the USA and the United Kingdom on January 17th, 1987.

The date is January 17th, 1987 and it's a Saturday. Anyone born today will have the star sign Capricorn. Currently, people are enjoying their weekend.

In America, the song Shake You Down by Gregory Abbott is on top of the singles charts. Over in the UK, Reet Petite by Jackie Wilson is the number one hit song. Ronald Reagan is currently the President of the United States and the movie The Golden Child is at the top of the Box Office.

On TV, people are watching popular shows such as "The Love Boat", "Cheers", "Scarecrow and Mrs. King" and "She-Ra: Princess of Power". Meanwhile, gamers are playing titles such as "Mario Bros.", "Tetris", "Boulder Dash" and "Zelda II: The Adventure of Link". Kids and teenagers are watching TV shows such as "The Smurfs", "Inspector Gadget", "Fraggle Rock" and "The Care Bears".

Popular toys at the moment include the likes of Lite-Brite, Pound Puppies, Fluppy Dogs and Hot Looks (fashion model dolls).

Ronald Reagan was the President of the United States on January 17th, 1987.

Margaret Thatcher was the Prime Minister of the United Kingdom on January 17th, 1987.

Enter your date of birth below to find out how old you were on January 17th, 1987.

Here are some fun statistics about January 17th, 1987.

Leave a comment and tell everyone why January 17th, 1987 is important to you.