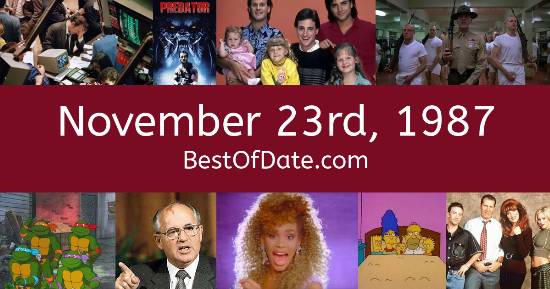 Songs that were on top of the music singles charts in the USA and the United Kingdom on November 23rd, 1987.

The date is November 23rd, 1987 and it's a Monday. Anyone born today will have the star sign Sagittarius. In America, Thanksgiven Day of 1987 is just around the corner.

Because it's 1987, the radio stations are being dominated by the likes of Los Lobos, Rick Astley, Whitney Houston, the Pet Shop Boys, Bon Jovi, U2 and Madonna. Actress Demi Moore and actor Bruce Willis have just been married. On TV, people are watching popular shows such as "Cheers", "Who's the Boss?", "The Golden Girls" and "Full House".

Meanwhile, gamers are playing titles such as "Tetris", "Boulder Dash", "Contra" and "Maniac Mansion ". Children and teenagers are currently watching television shows such as "The Smurfs", "Muppet Babies", "Jem and the Holograms" and "ALF". Popular toys at the moment include the likes of Water Ring Toss, Cabbage Patch Kids, Garbage Pail Kids (trading cards) and Jenga.

Ronald Reagan was the President of the United States on November 23rd, 1987.

Margaret Thatcher was the Prime Minister of the United Kingdom on November 23rd, 1987.

Enter your date of birth below to find out how old you were on November 23rd, 1987.

Here are some fun statistics about November 23rd, 1987.

Leave a comment and tell everyone why November 23rd, 1987 is important to you.