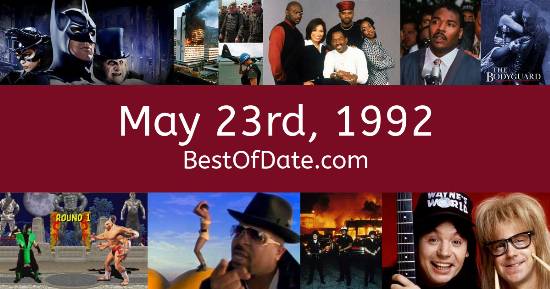 Songs that were on top of the music singles charts in the USA and the United Kingdom on May 23rd, 1992.

The date is May 23rd, 1992 and it's a Saturday. Anyone born today will have the star sign Gemini. Currently, people are enjoying their weekend.

George W. Bush Snr. is currently the President of the United States and the movie Basic Instinct is at the top of the Box Office. In the United Kingdom, John Major is the current Prime Minister. Texting is not a thing yet. Instead, people are using landline phones and pagers. Furthermore, the vast majority of people still have no idea what "the Internet" is.

In Europe, a war is continuing to rage on in Bosnia and Herzegovina. The film "Lethal Weapon 3", starring Mel Gibson and Danny Glover, has just been released in movie theaters. In soccer, Spanish side Barcelona have won the European Cup after beating Sampdoria 1-0. A late goal by Dutch player Ronald Koeman in extra time is enough to give the club their first ever European Cup.

The last episode of the series "MacGyver", starring Richard Dean Anderson, has recently been aired on television. The show, which followed the adventures of an extremely resourceful secret agent, had been running for nearly seven years. The films "Alien 3" and "Encino Man" have just been released in movie theaters. In television news, the final episode of "The Tonight Show Starring Johnny Carson" has just been aired. The talk show had been going since 1962.

In Sicily, Italian judge Giovanni Falcone has been assassinated by a Mafia bomb. If you were to travel back to this day, notable figures such as Anthony Perkins, Audrey Hepburn, Thurgood Marshall and Andre the Giant would all be still alive. On TV, people are watching popular shows such as "Night Court", "The Wonder Years", "In the Heat of the Night" and "Dinosaurs".

Meanwhile, gamers are playing titles such as "The Simpsons: Bart vs. the Space Mutants", "Streets of Rage", "F-16 Combat Pilot" and "Road Rash II". Kids and teenagers are watching TV shows such as "Dink, the Little Dinosaur", "In Living Color", "Rosie and Jim" and "Doug". Popular toys at the moment include the likes of the Easy-Bake Oven, Mr Frosty, the Super Nintendo Entertainment System (SNES) and Pogs / Milkcaps.

Notable events that occurred around May 23rd, 1992.

If you are looking for some childhood nostalgia, then check out May 23rd, 1998 instead.

Internet personality.
Born on May 23rd, 1999
He was born exactly 7 years after this date.

Historical weather information for May 23rd, 1992.

John Major was the Prime Minister of the United Kingdom on May 23rd, 1992.