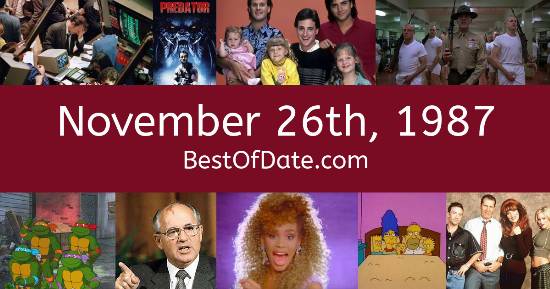 Songs that were on top of the music singles charts in the USA and the United Kingdom on November 26th, 1987:

The date is November 26th, 1987 and it's a Thursday. Anyone born today will have the star sign Sagittarius. In America, families are currently celebrating Thanksgiven Day.

Because it's 1987, the radio stations are being dominated by the likes of Los Lobos, Rick Astley, Whitney Houston, the Pet Shop Boys, Bon Jovi, U2 and Madonna. Actress Demi Moore and actor Bruce Willis have just been married. On TV, people are watching popular shows such as "Knots Landing", "Only Fools and Horses", "Family Ties" and "'Allo 'Allo!".

Meanwhile, gamers are playing titles such as "Missile Command", "Duck Hunt", "Tetris" and "Zelda II: The Adventure of Link". Kids and teenagers are watching TV shows such as "The Cosby Show", "Thomas the Tank Engine", "The Real Ghostbusters" and "ALF". If you're a kid or a teenager, then you're probably playing with toys such as "Lite-Brite", "Big wheel (tricycle)", "Transformers" and "Pogo ball / Lolo ball".

Celebrities, historical figures and noteable people who were born on the 26th of November:

National holidays and famous events that fall on the 26th of November:

Who was the Prime Minister of the United Kingdom on November 26th, 1987?

Enter your date of birth below to find out how old you were on November 26th, 1987.

Looking for some nostalgia? Here are some Youtube videos relating to November 26th, 1987. Please note that videos are automatically selected by Youtube and that results may vary! Click on the "Load Next Video" button to view the next video in the search playlist. In many cases, you'll find episodes of old TV shows, documentaries, music videos and soap dramas.

Here are some fun statistics about November 26th, 1987.