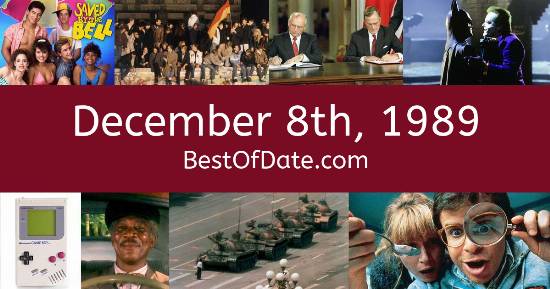 December 8th, 1989 relates to an event in a movie, book, game or television series:

Songs that were on top of the music singles charts in the USA and the United Kingdom on December 8th, 1989:

The date is December 8th, 1989 and it's a Friday. Anyone born today will have the star sign Sagittarius. Currently, people have "that Friday feeling" and are looking forward to the weekend.

The Christmas season of 1989 has just started. In America, the song We Didn't Start The Fire by Billy Joel is on top of the singles charts. Over in the UK, You Got It by New Kids on the Block is the number one hit song.

George W. Bush Snr. is currently the President of the United States and the movie The War of the Roses is at the top of the Box Office. In the United Kingdom, Margaret Thatcher is the current Prime Minister. In fashion, women are currently wearing sweater dresses, short skirts, small shoulder pads, animal print, long full wool coats and bulky sweaters. Meanwhile, men are wearing tracksuits, sweatshirts, Nike Air Jordan shoes and denim.

It's 1989, so the airwaves are being dominated by music artists such as Madonna, The Bangles, Phil Collins, Roxette, Milli Vanilli and The B-52s. People are watching popular TV shows such as "The Cosby Show", "Charles in Charge", "Teenage Mutant Ninja Turtles" and "Family Matters". Meanwhile, gamers are playing titles such as "Altered Beast", "Gain Ground", "SimCity" and "Golden Axe".

Kids and teenagers are watching TV shows such as "Thomas the Tank Engine", "Married... with Children", "The Wonder Years" and "Noozles". Popular toys include the likes of "Big wheel (tricycle)", "Micro Machines", "Game Boy" and "Polly Pocket".

Celebrities, historical figures and noteable people that were born on the 8th of December:

Who was the Prime Minister of the United Kingdom on December 8th, 1989?

Enter your date of birth below to find out how old you were on December 8th, 1989.

Looking for some nostalgia? Here are some Youtube videos relating to December 8th, 1989. Please note that videos are automatically selected by Youtube and that results may vary! Click on the "Load Next Video" button to view the next video in the search playlist. In many cases, you'll find episodes of old TV shows, documentaries, music videos and soap dramas.

Here are some fun statistics about December 8th, 1989.