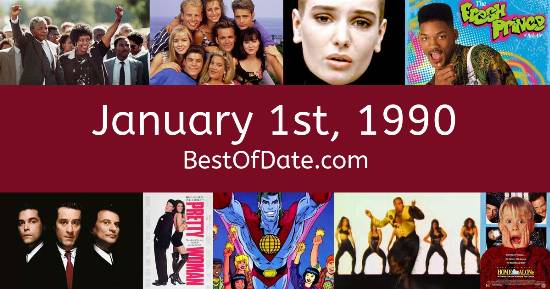 January 1st, 1990 relates to an event in a movie, book, game or television series:

Songs that were on top of the music singles charts in the USA and the United Kingdom on January 1st, 1990:

The date is January 1st, 1990 and it's a Monday. Anyone born today will have the star sign Capricorn. It's New Years Day, the official start of the year 1990 and a brand new decade. A lot of people are relaxing at home. Others are nursing hangovers from the night before.

It's 1990, so the airwaves are being dominated by music artists such as Sinéad O'Connor, Paula Abdul, Janet Jackson, Vanilla Ice, Mariah Carey, Stevie B, Madonna and MC Hammer. On TV, people are watching popular shows such as "Columbo.", "Cheers", "Star Trek: The Next Generation" and "The Wonder Years". Meanwhile, gamers are playing titles such as "Altered Beast", "Gain Ground", "Super Mario Land" and "Herzog Zwei".

Children and teenagers are currently watching television shows such as "Pingu", "Babar", "Saved by the Bell" and "Doogie Howser, M.D.". If you're a kid or a teenager, then you're probably playing with toys such as "Transformers", "Micro Machines", "Jenga" and "Polly Pocket".

Celebrities, historical figures and noteable people who were born on the 1st of January:

Who was the Prime Minister of the United Kingdom on January 1st, 1990?

Enter your date of birth below to find out how old you were on January 1st, 1990.

Looking for some nostalgia? Here are some Youtube videos relating to January 1st, 1990. Please note that videos are automatically selected by Youtube and that results may vary! Click on the "Load Next Video" button to view the next video in the search playlist. In many cases, you'll find episodes of old TV shows, documentaries, music videos and soap dramas.

Here are some fun statistics about January 1st, 1990.