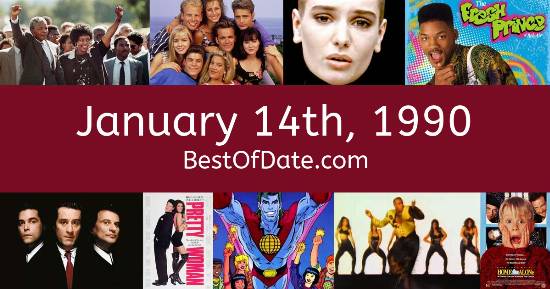 Songs that were on top of the music singles charts in the USA and the United Kingdom on January 14th, 1990:

The date is January 14th, 1990 and it's a Sunday. Anyone born today will have the star sign Capricorn. Currently, people are enjoying their weekend.

In America, the song Another Day In Paradise by Phil Collins is on top of the singles charts. Over in the UK, Hangin' Tough by New Kids on the Block is the number one hit song. George W. Bush Snr. is currently the President of the United States and the movie The War of the Roses is at the top of the Box Office.

It's 1990, so the airwaves are being dominated by music artists such as Sinéad O'Connor, Paula Abdul, Janet Jackson, Vanilla Ice, Mariah Carey, Stevie B, Madonna and MC Hammer. The "Leaning Tower of Pisa" in Italy has been closed to the public due to safety concerns that it is "leaning too much". In music, Irish singer Sinead O'Connor has just released her song "Nothing Compares 2 U".

The Soviet Union is continuing to unravel. In Lithuania, 300,000 people have taken to the streets to demonstrate for independence from the Soviet Union. Douglas Wilder has just become the first African American to be elected as a governor in the United States. People are watching popular TV shows such as "Cheers", "'Allo 'Allo!", "Charles in Charge" and "Teenage Mutant Ninja Turtles".

Meanwhile, gamers are playing titles such as "Duck Hunt", "SimCity", "Castlevania III: Dracula's Curse" and "Batman: The Video Game". Kids and teenagers are watching TV shows such as "Danger Mouse", "Alvin and the Chipmunks", "Muppet Babies" and "Nellie the Elephant". If you're a kid or a teenager, then you're probably playing with toys such as "Easy-Bake Oven", "My Little Pony (figures)", "Micro Machines" and "Jenga".

Celebrities, historical figures and noteable people that were born on the 14th of January:

Who was the Prime Minister of the United Kingdom on January 14th, 1990?

Enter your date of birth below to find out how old you were on January 14th, 1990.

Looking for some nostalgia? Here are some Youtube videos relating to January 14th, 1990. Please note that videos are automatically selected by Youtube and that results may vary! Click on the "Load Next Video" button to view the next video in the search playlist. In many cases, you'll find episodes of old TV shows, documentaries, music videos and soap dramas.

Here are some fun statistics about January 14th, 1990.