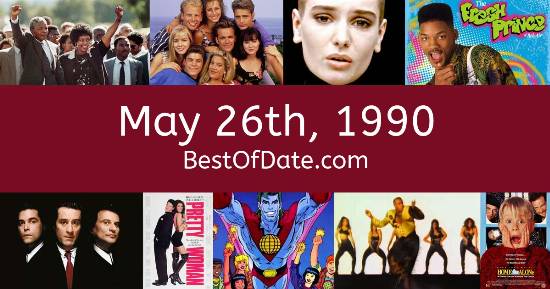 Songs that were on top of the music singles charts in the USA and the United Kingdom on May 26th, 1990.

The date is May 26th, 1990 and it's a Saturday. Anyone born today will have the star sign Gemini. Currently, people are enjoying their weekend.

The summer of 1990 has finally arrived. The weather has warmed up and the evenings are brighter than usual. In America, the song Vogue by Madonna is on top of the singles charts. Over in the UK, Killer by Adamski is the number one hit song.

George W. Bush Snr. is currently the President of the United States and the movie Back to the Future Part III is at the top of the Box Office. In the United Kingdom, Margaret Thatcher is the current Prime Minister. Texting is not a thing yet. Instead, people are using landline phones and pagers. Furthermore, the vast majority of people still have no idea what "the Internet" is.

In fashion, many of the trends from the late 80s are still popular. Colored tights, denim overalls, leotards, flannel shirts and shoulder pads are all fashionable at the moment. It's 1990, so the airwaves are being dominated by music artists such as Sinéad O'Connor, Paula Abdul, Janet Jackson, Vanilla Ice, Mariah Carey, Stevie B, Madonna and MC Hammer. Rapper Ice Cube has just released his solo debut album "AmeriKKKa's Most Wanted". This is the rapper's first album since his bitter split with N.W.A.

In Europe, the Soviet Union is continuing to fall apart. Romania, which was once a Soviet state, has just held its first parliamentary elections after the execution of Communist dictator Nicolae Ceaușescu last December. The series finale of Newhart has just been aired on television and viewers are shocked that the entire sitcom was a dream that the main character was having. Italian side A.C Milan have won the European Cup after defeating Benfica 1-0 in the final. A 68th minute goal by Frank Rijkaard was enough to secure the victory.

A dark comedy film called "The Witches" is currently being shown in movie theaters. If you were to travel back to this day, notable figures such as Stevie Ray Vaughan, Roald Dahl, John Bardeen and Miles Davis would all be still alive. On TV, people are watching popular shows such as "Last of the Summer Wine", "Magnum, P.I.", "MacGyver" and "Star Trek: The Next Generation".

Meanwhile, gamers are playing titles such as "Paperboy", "Golden Axe", "World Cup Italia '90" and "Phantasy Star II". Children and teenagers are currently watching television shows such as "Married... with Children", "Hey Dude", "Beetlejuice" and "In Living Color". If you're a kid or a teenager, then you're probably playing with toys such as the Easy-Bake Oven, Water Ring Toss, Koosh Ball and the Sega Genesis / Mega Drive.

Notable events that occurred around May 26th, 1990.

If you are looking for some childhood nostalgia, then check out May 26th, 1996 instead.

Historical weather information for May 26th, 1990.

Margaret Thatcher was the Prime Minister of the United Kingdom on May 26th, 1990.