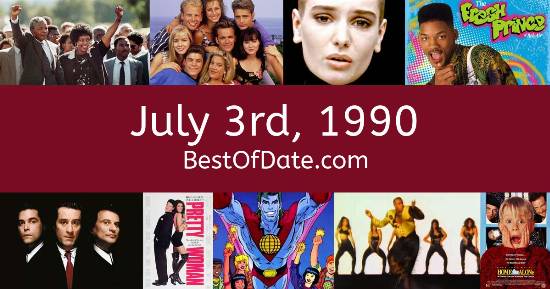 Songs that were on top of the music singles charts in the USA and the United Kingdom on July 3rd, 1990.

The date is July 3rd, 1990 and it's a Tuesday. Anyone born today will have the star sign Cancer. In America, the July 4th celebrations are fast approaching.

George W. Bush Snr. is currently the President of the United States and the movie Days of Thunder is at the top of the Box Office. In the United Kingdom, Margaret Thatcher is the current Prime Minister. Texting is not a thing yet. Instead, people are using landline phones and pagers. Furthermore, the vast majority of people still have no idea what "the Internet" is.

In Europe, West Germany and East Germany have officially merged their economies. Rapper Vanilla Ice has just released his song "Ice Ice Baby". If you were to travel back to this day, notable figures such as Stevie Ray Vaughan, Roald Dahl, John Bardeen and Miles Davis would all be still alive.

On TV, people are watching popular shows such as "Who's the Boss?", "The Wonder Years", "Roseanne" and "Quantum Leap". Meanwhile, gamers are playing titles such as "Paperboy", "RoboCop", "DuckTales" and "Castlevania III: Dracula's Curse". Kids and teenagers are watching TV shows such as "Thomas the Tank Engine", "The Real Ghostbusters", "Fireman Sam" and "Hey Dude".

If you're a kid or a teenager, then you're probably playing with toys such as My Little Pony (figures), Transformers, Popples and Polly Pocket.

If you are looking for some childhood nostalgia, then check out July 3rd, 1996 instead.

George W. Bush Snr. was the President of the United States on July 3rd, 1990.

Margaret Thatcher was the Prime Minister of the United Kingdom on July 3rd, 1990.

Enter your date of birth below to find out how old you were on July 3rd, 1990.

Here are some fun statistics about July 3rd, 1990.