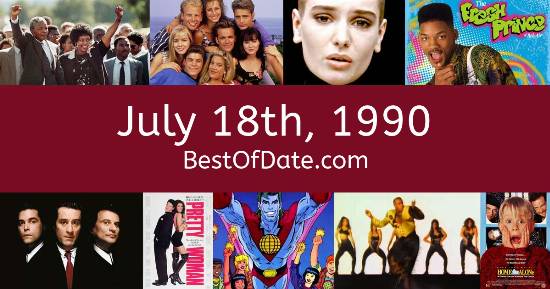 Songs that were on top of the music singles charts in the USA and the United Kingdom on July 18th, 1990.

The date is July 18th, 1990 and it's a Wednesday. Anyone born today will have the star sign Cancer. It's summer, so the temperatures are warmer and the evenings are longer than usual.

In America, the song She Ain't Worth It by Glenn Medeiros & Bobby Brown is on top of the singles charts. Over in the UK, Sacrifice / Healing Hands by Elton John is the number one hit song. George W. Bush Snr. is currently the President of the United States and the movie Die Hard 2 is at the top of the Box Office.

It's 1990, so the airwaves are being dominated by music artists such as Sinéad O'Connor, Paula Abdul, Janet Jackson, Vanilla Ice, Mariah Carey, Stevie B, Madonna and MC Hammer. The film Ghost, starring Patrick Swayze, is currently being shown in movie theaters. If you were to travel back to this day, notable figures such as Stevie Ray Vaughan, Roald Dahl, John Bardeen and Miles Davis would all be still alive.

On TV, people are watching popular shows such as "Magnum, P.I.", "Full House", "Seinfeld" and "Blossom". Meanwhile, gamers are playing titles such as "Gain Ground", "Super Mario Land", "Super Mario World" and "Phantasy Star II". Children and teenagers are currently watching television shows such as "The Cosby Show", "21 Jump Street", "Count Duckula" and "Round the Twist".

If you are looking for some childhood nostalgia, then check out July 18th, 1996 instead.

Margaret Thatcher was the Prime Minister of the United Kingdom on July 18th, 1990.