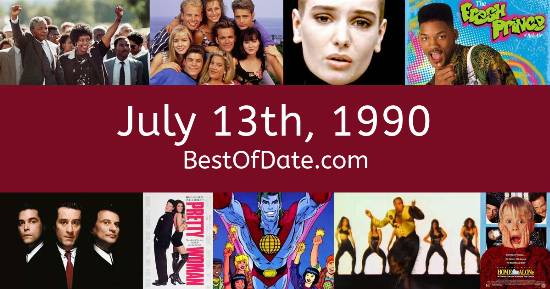 Songs that were on top of the music singles charts in the USA and the United Kingdom on July 13th, 1990:

The date is July 13th, 1990 and it's a Friday. Anyone born today will have the star sign Cancer. Currently, people have "that Friday feeling" and are looking forward to the weekend.

George W. Bush Snr. is currently the President of the United States and the movie Die Hard 2 is at the top of the Box Office. In the United Kingdom, Margaret Thatcher is the current Prime Minister. In fashion, many of the trends from the late 80s are still popular. Colored tights, denim overalls, leotards, flannel shirts and shoulder pads are all fashionable at the moment.

It's 1990, so the airwaves are being dominated by music artists such as Sinéad O'Connor, Paula Abdul, Janet Jackson, Vanilla Ice, Mariah Carey, Stevie B, Madonna and MC Hammer. West Germany have won the 1990 FIFA World Cup after beating Argentina 1-0 in the final. An 85th minute penalty from German defender Andreas Brehme was enough to seal the victory. The film Ghost, starring Patrick Swayze, is currently being shown in movie theaters.

If you're a kid or a teenager, then you're probably playing with toys such as "Easy-Bake Oven", "Sylvanian Families", "Popples" and "Micro Machines".

Celebrities, historical figures and noteable people who were born on the 13th of July:

Who was the Prime Minister of the United Kingdom on July 13th, 1990?

Looking for some nostalgia? Here are some Youtube videos relating to July 13th, 1990. Please note that videos are automatically selected by Youtube and that results may vary! Click on the "Load Next Video" button to view the next video in the search playlist. In many cases, you'll find episodes of old TV shows, documentaries, music videos and soap dramas.