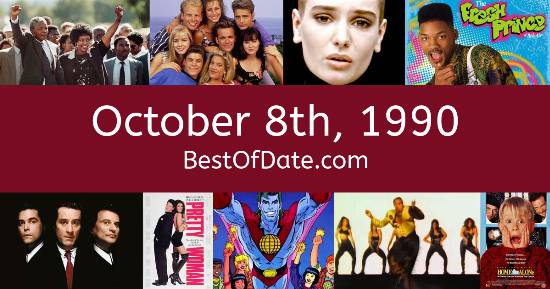 Songs that were on top of the music singles charts in the USA and the United Kingdom on October 8th, 1990.

The movie "Pacific Heights" was at the top of the box office on October 8th, 1990.

The date is October 8th, 1990 and it's a Monday. Anyone born today will have the star sign Libra. The summer is long gone. Temperatures have started to become much cooler and the evenings are beginning to get darker.

Fallen leaves have carpeted driveways, lawns, pathways and sidewalks and there's a fresh earthy scent in the ear. In America, the song Praying For Time by George Michael is on top of the singles charts. Over in the UK, Show Me Heaven by Maria McKee is the number one hit song.

George W. Bush Snr. is currently the President of the United States and the movie Pacific Heights is at the top of the Box Office. In the United Kingdom, Margaret Thatcher is the current Prime Minister. In fashion, many of the trends from the late 80s are still popular. Colored tights, denim overalls, leotards, flannel shirts and shoulder pads are all fashionable at the moment.

In Europe, the Soviet Union is continuing to dissolve. The countries of West Germany and East Germany have been formally reunified. A new teen drama called "Beverly Hills, 90210" has just made its television debut.

On TV, people are watching popular shows such as "Last of the Summer Wine", "The Golden Girls", "21 Jump Street" and "The Flash". Meanwhile, gamers are playing titles such as "Herzog Zwei", "Super Mario World", "World Cup Italia '90" and "Phantasy Star II". Kids and teenagers are watching TV shows such as "Alvin and the Chipmunks", "The Real Ghostbusters", "Married... with Children" and "Fireman Sam".

If you're a kid or a teenager, then you're probably playing with toys such as My Little Pony (figures), Transformers, Sylvanian Families and Yo-yo.

Celebrities, historical figures and notable people who were born on the 8th of October.

National holidays and famous events that fall on the 8th of October.

George W. Bush Snr. was the President of the United States on October 8th, 1990.

Margaret Thatcher was the Prime Minister of the United Kingdom on October 8th, 1990.

Enter your date of birth below to find out how old you were on October 8th, 1990.

Here are some fun statistics about October 8th, 1990.

Leave a comment and tell everyone why October 8th, 1990 is important to you.