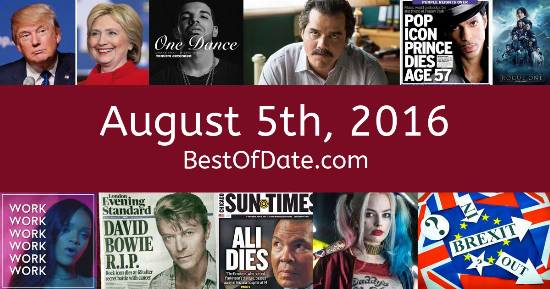 Songs that were on top of the music singles charts in the USA and the United Kingdom on August 5th, 2016.

The following comments about August 5th, 2016 were written by our visitors.

Suicide Squad always makes me think of fall, 2016. I remember we had a fancy dress party and every fourth or fifth girl was dressed as Harley Quinn, lol.
Posted on May 23rd, 2022 16:27

The date is August 5th, 2016, and it's a Friday. Anyone born today will have the star sign Leo. Currently, people have "that Friday feeling" and are looking forward to the weekend.

It's summer, so the temperatures are warmer and the evenings are longer than usual. In America, the song One Dance by Drake is on top of the singles charts. Over in the UK, Cold Water by Major Lazer featuring Justin Bieber is the number one hit song.

Barack Obama is currently the President of the United States, and the movie Jason Bourne is at the top of the Box Office. In the United Kingdom, Theresa May is the current Prime Minister. It's 2016, so the music charts are being dominated by artists such as Drake, Lukas Graham, Sia, Mike Posner, The Chainsmokers and Calvin Harris.

The 2016 Summer Olympics are currently taking place in Rio de Janeiro, Brazil. If you were to travel back to this day, notable figures such as Fidel Castro, Big Syke, George Michael and Carrie Fisher would all be still alive. On TV, people are watching popular shows such as "Prison Break", "Modern Family", "Once Upon a Time" and "Jane the Virgin".

Meanwhile, gamers are playing titles such as "Minecraft", "Overwatch", "Lego Star Wars: The Force Awakens" and "Inside". Children and teenagers are currently watching television shows such as "Dora the Explorer", "Jake and the Never Land Pirates", "Agents of S.H.I.E.L.D." and "Bunnicula". Popular toys at the moment include the likes of the PlayStation 4, the Xbox One, Barbie Saddle n Ride and L.O.L. Surprise!.

These are trending news stories and fads that were prevalent at this time. These are topics that would have been in the media on August 5th, 2016.

News stories and other events that happened around August 5th, 2016.

Check out our personality summary for people who were born on August 5th, 2016.

Television shows that people were watching in August, 2016.

Popular video games that people were playing in August of 2016.

American astronaut. Deceased
Born on August 5th, 1930
He was not alive on this date.

Beastie Boys member. Deceased
Born on August 5th, 1964
He was not alive on this date.

Barack Obama was the President of the United States on August 5th, 2016.

Theresa May was the Prime Minister of the United Kingdom on August 5th, 2016.

Find out what your age was on August 5th, 2016, by entering your DOB below.
This information is not saved on our server.

Here are some fun statistics about August 5th, 2016.