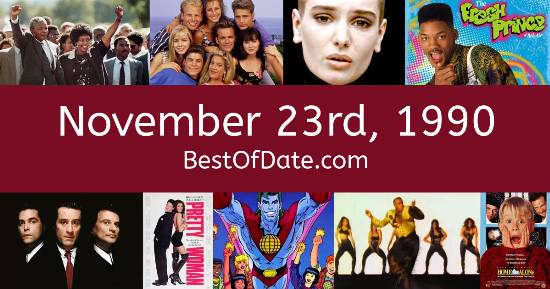 On November 23rd, 1990, the following songs were at the top of the music charts in the USA and the UK.

The date is November 23rd, 1990, and it's a Friday. Anyone born today will have the star sign Sagittarius. Currently, people have "that Friday feeling" and are looking forward to the weekend.

It is Black Friday in the United States - a day that many consider to be the start of the Christmas shopping season. It's November, so the evenings are getting darker and the days are getting colder. In America, the song Love Takes Time by Mariah Carey is on top of the singles charts.

Pop star Madonna has just released her greatest hits album "The Immaculate Collection". New Zealand is in shock following the news that a mass shooting in Aramoana has claimed the lives of 13 people. R&B group Milli Vanilli have been stripped of their Grammy following revelations that they had been lip-syncing.

The films "Rocky V", "Home Alone" and "Predator 2" currently being shown in movie theaters. Following a leadership challenge, Margaret Thatcher has decided to step down as leader of the Conservative Party after 15 years of being in charge. Tributes are pouring in for author Roald Dahl, who recently passed away due to a rare cancer of the blood called myelodysplastic syndrome.

If you were to travel back to this day, notable figures such as Roald Dahl, John Bardeen, Miles Davis and Freddie Mercury would all be still alive. On TV, people are watching popular shows such as "Married... with Children", "The Wonder Years", "Seinfeld" and "Family Matters". Meanwhile, gamers are playing titles such as "Duck Hunt", "Paperboy", "Super Mario World" and "Wing Commander".

Kids and teenagers are watching TV shows such as "Adventures of the Gummi Bears", "Adventures of the Little Koala", "Count Duckula" and "Chip 'n' Dale's Rescue Rangers". Popular toys at the moment include the likes of Sylvanian Families, Micro Machines, Jenga and Polly Pocket.

These are trending news stories and fads that were prevalent at this time. These are topics that would have been in the media on November 23rd, 1990.

News stories and other events that happened around November 23rd, 1990.

Check out our personality summary for people who were born on November 23rd, 1990.

If you are looking for some childhood nostalgia, then you should check out November 23rd, 1996 instead.

Singer.
Born on November 23rd, 1992
She was born exactly 2 years after this date.

TikTok user.
Born on November 23rd, 2002
She was born exactly 12 years after this date.

George W. Bush Snr. was the President of the United States on November 23rd, 1990.

Margaret Thatcher was the Prime Minister of the United Kingdom on November 23rd, 1990.

Find out what your age was on November 23rd, 1990, by entering your DOB below.
This information is not saved on our server.

Here are some fun statistics about November 23rd, 1990.