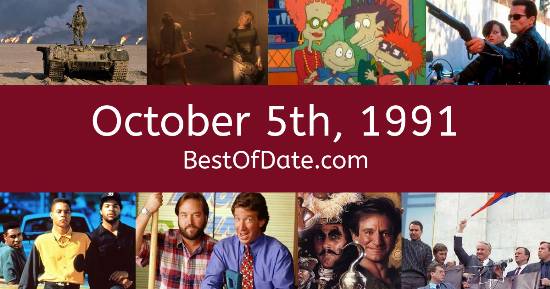 Songs that were on top of the music singles charts in the USA and the United Kingdom on October 5th, 1991.

The movie "Freddy's Dead: The Final Nightmare" was at the top of the box office on October 5th, 1991.

The date is October 5th, 1991 and it's a Saturday. Anyone born today will have the star sign Libra. Currently, people are enjoying their weekend.

The summer is long gone. Temperatures have started to become much cooler and the evenings are beginning to get darker. Fallen leaves have carpeted driveways, lawns, pathways and sidewalks and there's a fresh earthy scent in the ear. In America, the song Good Vibrations by Marky Mark is on top of the singles charts.

A rock subgenre called "Grunge" is starting to rise in popularity. In Europe, the Soviet Union is continuing to dissolve. Tributes are pouring in for American musician Miles Davis, who has passed away at the age of 65. Davis' doctor has announced that the famous jazz trumpeter died of a stroke, pneumonia and respiratory failure.

In Croatia, the Yugoslav Army are currently laying siege to the city of Dubrovnik. In US politics, Arkansas Governor Bill Clinton has just announced that he will be seeking the 1992 Democratic nomination for President of the United States. On TV, people are watching popular shows such as "Only Fools and Horses", "The Golden Girls", "Married... with Children" and "Family Matters".

Meanwhile, gamers are playing titles such as "Duck Hunt", "Battletoads", "Sonic the Hedgehog" and "Streets of Rage". Kids and teenagers are watching TV shows such as "Growing Pains", "The Fresh Prince of Bel-Air", "Clarissa Explains It All" and "Rugrats". If you're a kid or a teenager, then you're probably playing with toys such as My Little Pony (figures), Sylvanian Families, the Game Boy and the Super Nintendo Entertainment System (SNES).

George W. Bush Snr. was the President of the United States on October 5th, 1991.

John Major was the Prime Minister of the United Kingdom on October 5th, 1991.

Enter your date of birth below to find out how old you were on October 5th, 1991.

Here are some fun statistics about October 5th, 1991.

Leave a comment and tell everyone why October 5th, 1991 is important to you.