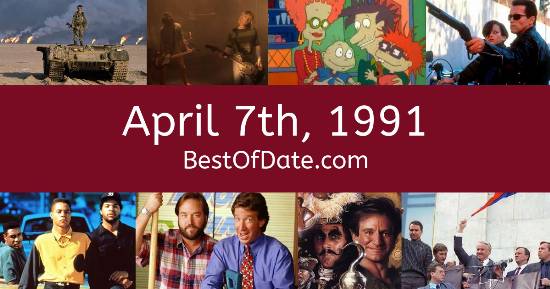 These songs were on top of the music charts in the United States and the United Kingdom on April 7th, 1991.

The movie "Teenage Mutant Ninja Turtles II" was at the top of the Box Office on April 7th, 1991.

The date is April 7th, 1991, and it's a Sunday. Anyone born today will have the star sign Aries. Currently, people are enjoying their weekend.

The summer of 1991 is drawing closer and temperatures have started to rise. In America, the song Coming Out Of The Dark by Gloria Estefan is on top of the singles charts. Over in the UK, The One And Only by Chesney Hawkes is the number one hit song.

George W. Bush Snr. is currently the President of the United States, and the movie Teenage Mutant Ninja Turtles II is at the top of the Box Office. In the United Kingdom, John Major is the current Prime Minister. Texting is not a thing yet. Instead, people are using landline phones and pagers. Furthermore, the vast majority of people still have no idea what "the Internet" is.

In the Middle East, Operation Desert storm has recently come to an end after a short ground war between US-led forces and the Iraq military. President Bush has declared that the country of Kuwait has been liberated. Meanwhile, an anti-Saddam uprising has started in the Iraqi city of Basra. In Europe, the Soviet Union is continuing to dissolve as Georgia votes for independence from the USSR. Meanwhile, Albania has held its first free elections since the 1920s. If you were to travel back to this day, notable figures such as Miles Davis, Freddie Mercury, Robert Reed and Anthony Perkins would all be still alive.

If you're a kid or a teenager, then you're probably playing with toys such as Transformers, Pogo ball / Lolo ball, Polly Pocket and Lego Pirates.

These are trending news stories and fads that were prevalent at this time. These are topics that would have been in the media on April 7th, 1991.

News stories, pop culture trends, and other events that happened around April 7th, 1991.

Check out our personality summary for people who were born on April 7th, 1991.

Television shows that people were watching in April, 1991.

Popular video games that people were playing in April of 1991.

If you are looking for some childhood nostalgia, then you should check out April 7th, 1997, instead.

Celebrities, historical figures, and other notable people who were born on April 7th.

George W. Bush Snr. was the President of the United States on April 7th, 1991.

Find out what your age was on April 7th, 1991, by entering your DOB below.
This information is not saved on our server.

Here are some fun statistics about April 7th, 1991.