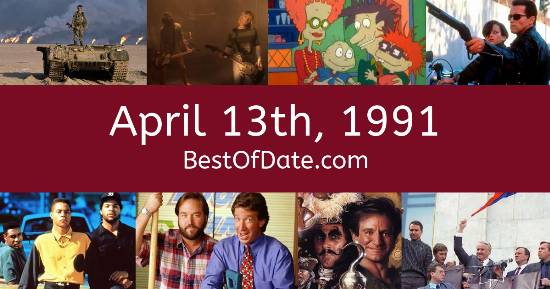 Songs that were on top of the music singles charts in the USA and the United Kingdom on April 13th, 1991:

The date is April 13th, 1991 and it's a Saturday. Anyone born today will have the star sign Aries. Currently, people are enjoying their weekend.

The summer of 1991 is drawing closer and temperatures have started to rise. In America, the song I've Been Thinking About You by London Beat is on top of the singles charts. Over in the UK, The One And Only by Chesney Hawkes is the number one hit song.

George W. Bush Snr. is currently the President of the United States and the movie Teenage Mutant Ninja Turtles II is at the top of the Box Office. In the United Kingdom, John Major is the current Prime Minister. In fashion, many of the trends from the late 80s are still popular. Colored tights, denim overalls, leotards, flannel shirts and shoulder pads are all fashionable at the moment.

In Europe, the USSR is continuing to disintegrate. Georgia has recently declared its independence and the first group of Soviet troops have started to leave Poland. Boxing fans are currently excited about the upcoming title fight between Evander Holyfield and George Foreman, which is due to take place on the 19th. On TV, people are watching popular shows such as "Knots Landing", "Only Fools and Horses", "Family Matters" and "Clarissa Explains It All".

Meanwhile, gamers are playing titles such as "Golden Axe", "Phantasy Star II", "Wing Commander" and "Castle of Illusion Starring Mickey Mouse". Kids and teenagers are watching TV shows such as "Danger Mouse", "Doogie Howser, M.D.", "Rosie and Jim" and "Beverly Hills, 90210". If you're a kid or a teenager, then you're probably playing with toys such as "My Little Pony (figures)", "Micro Machines", "Polly Pocket" and "G.I. Joe (figures)".

Who was the Prime Minister of the United Kingdom on April 13th, 1991?

Enter your date of birth below to find out how old you were on April 13th, 1991.

Looking for some nostalgia? Here are some Youtube videos relating to April 13th, 1991. Please note that videos are automatically selected by Youtube and that results may vary! Click on the "Load Next Video" button to view the next video in the search playlist. In many cases, you'll find episodes of old TV shows, documentaries, music videos and soap dramas.