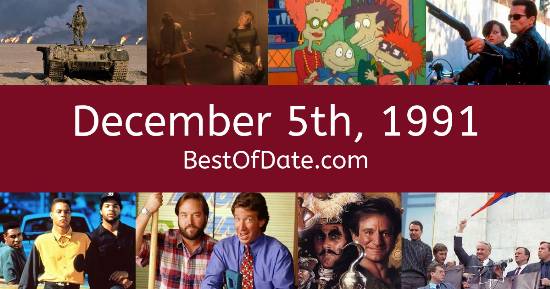 Songs that were on top of the music singles charts in the USA and the United Kingdom on December 5th, 1991.

The movie "Star Trek VI: The Undiscovered Country" was at the top of the box office on December 5th, 1991.

The date is December 5th, 1991 and it's a Thursday. Anyone born today will have the star sign Sagittarius. The Christmas season of 1991 has just started.

In America, the song Black Or White by Michael Jackson is on top of the singles charts. Over in the UK, Don't Let The Sun Go Down On Me by George Michael & Elton John is the number one hit song. George W. Bush Snr. is currently the President of the United States and the movie Star Trek VI: The Undiscovered Country is at the top of the Box Office.

The trial of four police officers for the beating of Rodney King back in March has recently been moved to Simi Valley, California. The decision has raised eyebrows as Simi Valley is a nearly all-white suburb. Pop star Michael Jackson has just released his album "Dangerous", which contains songs such as "Black or White" and "Remember the Time", In Europe, the Soviet Union is continuing to dissolve. In Ukraine, over 92% of people have voted for independence from the USSR.

American airline company "Pan Am" airways has just collapsed after 64 years of being in business. As a result, 7,500 people have lost their jobs. There are sighs of relief following the recent release of American journalist Terry A. Anderson, who had been held captive by his Lebanese kidnappers for over seven years. If you were to travel back to this day, notable figures such as Robert Reed and Anthony Perkins would be still alive.

On TV, people are watching popular shows such as "Knots Landing", "Only Fools and Horses", "The Wonder Years" and "In the Heat of the Night". Meanwhile, gamers are playing titles such as "Duck Hunt", "SimCity", "The Simpsons: Bart vs. the Space Mutants" and "Battletoads". Children and teenagers are currently watching television shows such as "The Cosby Show", "The Wonder Years", "The Simpsons" and "Art Attack".

If you are looking for some childhood nostalgia, then check out December 5th, 1997 instead.

Soccer player.
Born on December 5th, 1995
He was born exactly 4 years after this date.

American YouTuber.
Born on December 5th, 2004
She was born exactly 13 years after this date.

George W. Bush Snr. was the President of the United States on December 5th, 1991.

John Major was the Prime Minister of the United Kingdom on December 5th, 1991.

Enter your date of birth below to find out how old you were on December 5th, 1991.

Here are some fun statistics about December 5th, 1991.

Have something to say about December 5th, 1991?