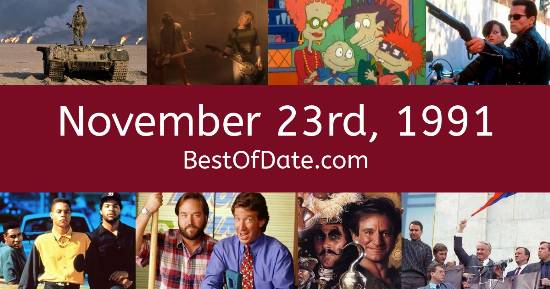 Songs that were on top of the music singles charts in the USA and the United Kingdom on November 23rd, 1991.

The date is November 23rd, 1991 and it's a Saturday. Anyone born today will have the star sign Sagittarius. Currently, people are enjoying their weekend.

In America, Thanksgiven Day of 1991 is just around the corner. It's November, so the evenings are getting darker and the days are getting colder. In America, the song When A Man Loves A Woman by Michael Bolton is on top of the singles charts.

Over in the UK, Black Or White by Michael Jackson is the number one hit song. George W. Bush Snr. is currently the President of the United States and the movie Cape Fear is at the top of the Box Office. In the United Kingdom, John Major is the current Prime Minister.

A rock subgenre called "Grunge" is starting to rise in popularity. Pop star Michael Jackson has just released the music video for his new song "Black or White". In Europe, the Soviet Union is continuing to dissolve. The Communist Party has just been officially banned from Russia by a presidential decree.

Yugoslav forces have just captured the Croatian town of Vukovar following an 87-day battle. Irish rock band U2 have released their new album "Achtung Baby". The films "Beauty and the Beast" and "The Addams Family" have just been released in movie theaters.

Queen frontman Freddie Mercury has confirmed that he has AIDS. On TV, people are watching popular shows such as "Married... with Children", "Saved by the Bell", "Rugrats" and "Baywatch". Meanwhile, gamers are playing titles such as "SimCity", "Railroad Tycoon", "Sonic the Hedgehog" and "F-16 Combat Pilot".

Kids and teenagers are watching TV shows such as "The Cosby Show", "Garfield and Friends", "Doogie Howser, M.D." and "The Adventures of Pete & Pete". If you're a kid or a teenager, then you're probably playing with toys such as the Easy-Bake Oven, Transformers, Teenage Mutant Hero Turtles figures and Lego Pirates.

If you are looking for some childhood nostalgia, then check out November 23rd, 1997 instead.

Singer.
Born on November 23rd, 1992
She was born exactly one year after this date.

George W. Bush Snr. was the President of the United States on November 23rd, 1991.

John Major was the Prime Minister of the United Kingdom on November 23rd, 1991.

Enter your date of birth below to find out how old you were on November 23rd, 1991.

Here are some fun statistics about November 23rd, 1991.