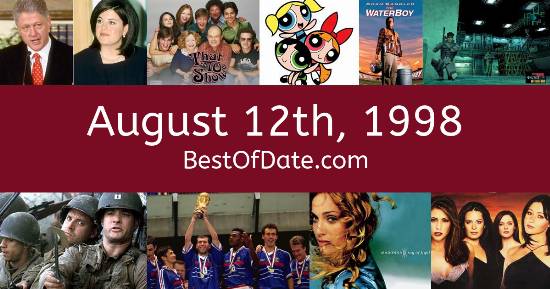 Songs that were on top of the music singles charts in the USA and the United Kingdom on August 12th, 1998.

The date is August 12th, 1998 and it's a Wednesday. Anyone born today will have the star sign Leo. It's summer, so the temperatures are warmer and the evenings are longer than usual.

In America, the song The Boy Is Mine by Brandy & Monica is on top of the singles charts. Over in the UK, No Matter What by Boyzone is the number one hit song. Bill Clinton is currently the President of the United States and the movie Mask of Zorro is at the top of the Box Office.

The Clinton-Lewinsky sex scandal is receiving ongoing media attention. A musical subgenre called "Nu metal" is beginning to take off, aided by the success of bands such as Korn. On TV, people are watching popular shows such as "ER", "Beyond Belief: Fact or Fiction", "Stargate SG-1" and "Dawson's Creek".

Meanwhile, gamers are playing titles such as "Super Mario 64", "Oddworld: Abe's Oddysee", "Age of Empires" and "World Cup 98". Kids and teenagers are watching TV shows such as "In the House", "Pinky and the Brain", "Blue's Clues" and "Bear in the Big Blue House". Popular toys at the moment include the likes of Super Soaker (water gun), Littlest Pet Shop, the Tamagotchi and the Pokémon Trading Card Game.

A Spotify playlist of songs from the year 1998. Take a trip back to the days of Cher, Celine Dion, Eagle-Eye Cherry, Robbie Williams and Faithless.

Bill Clinton was the President of the United States on August 12th, 1998.

Tony Blair was the Prime Minister of the United Kingdom on August 12th, 1998.

Enter your date of birth below to find out how old you were on August 12th, 1998.

Leave a comment and tell everyone why August 12th, 1998 is important to you.