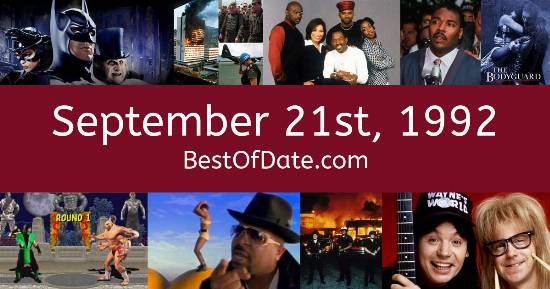 These songs were on top of the music charts in the United States and the United Kingdom on September 21st, 1992.

The top "Box Office" movie on this date was the film "Sneakers".

The following comments about September 21st, 1992 were written by our visitors.

The date is September 21st, 1992, and it's a Monday. Anyone born today will have the star sign Virgo. Schools and colleges are starting again and Autumn has officially arrived. As a result, temperatures are beginning to cool and trees are starting to shed their leaves.

The earthy smells of fall have started to fill the air. In America, the song End Of The Road by Boyz II Men is on top of the singles charts. Over in the UK, Ebenezer Goode by Shamen is the number one hit song.

George W. Bush Snr. is currently the President of the United States, and the movie Sneakers is at the top of the Box Office. In the United Kingdom, John Major is the current Prime Minister. Texting is not a thing yet. Instead, people are using landline phones and pagers. Furthermore, the vast majority of people still have no idea what "the Internet" is.

In Europe, a war is continuing to rage on in Bosnia and Herzegovina. In soccer, 17-year-old right back Gary Neville has just made his debut for Manchester United. Basic Instinct actor Michael Douglas has started a 30-day treatment for alcoholism and drug addiction.

Meanwhile, in music news, English alternative rock band Radiohead have recently released their debut single "Creep". If you were to travel back to this day, notable figures such as Audrey Hepburn, Thurgood Marshall, Andre the Giant and Bobby Moore would all be still alive. On TV, people are watching popular shows such as "Murder, She Wrote", "Dinosaurs", "Step by Step" and "Martin".

Meanwhile, gamers are playing titles such as "F-Zero", "The Legend of Zelda: A Link to the Past", "Teenage Mutant Ninja Turtles III: The Manhattan Project" and "Street Fighter II: The World Warrior". Kids and teenagers are watching TV shows such as "Adventures of the Little Koala", "Doogie Howser, M.D.", "Doug" and "The Addams Family". Popular toys at the moment include the likes of Micro Machines, the Ghostbusters Proton Pack, Polly Pocket and the SEGA Game Gear.

These are trending news stories and fads that were prevalent at this time. These are topics that would have been in the media on September 21st, 1992.

News stories and other events that happened around September 21st, 1992.

Check out our personality summary for people who were born on September 21st, 1992.

Television shows that people were watching in September, 1992.

Popular video games that people were playing in September of 1992.

If you are looking for some childhood nostalgia, then you should check out September 21st, 1998 instead.

George W. Bush Snr. was the President of the United States on September 21st, 1992.

John Major was the Prime Minister of the United Kingdom on September 21st, 1992.

Find out what your age was on September 21st, 1992, by entering your DOB below.
This information is not saved on our server.

Here are some fun statistics about September 21st, 1992.