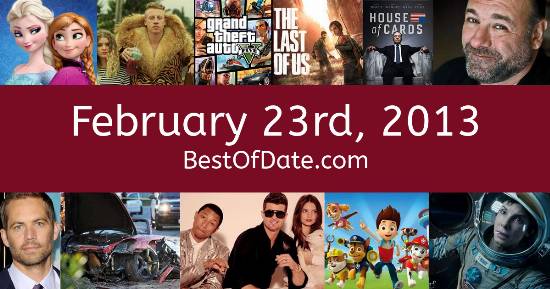 Songs that were on top of the music singles charts in the USA and the United Kingdom on February 23rd, 2013:

The date is February 23rd, 2013 and it's a Saturday. Anyone born today will have the star sign Pisces. Currently, people are enjoying their weekend.

In America, the song Thrift Shop by Macklemore & Ryan Lewis is on top of the singles charts. Over in the UK, One Way Or AAnother by One Direction is the number one hit song. Barack Obama is currently the President of the United States and the movie Identity Thief is at the top of the Box Office.

An Internet meme called "The Harlem Shake" is currently going viral. News has broke that South African model Reeva Steenkamp has been shot and killed by her boyfriend Oscar Pistorius at their home Pretoria. Tributes are pouring in for country singer Mindy McCready, who recently committed suicide at her home in Arkansas.

On TV, people are watching popular shows such as "Bones", "Sons of Anarchy", "The Vampire Diaries" and "White Collar". Meanwhile, gamers are playing titles such as "Sleeping Dogs", "Borderlands 2", "Halo 4" and "Call of Duty: Black Ops II". Children and teenagers are currently watching television shows such as "The Fairly OddParents", "Peppa Pig", "Team Umizoomi" and "Austin & Ally".

Who was the Prime Minister of the United Kingdom on February 23rd, 2013?

Enter your date of birth below to find out how old you were on February 23rd, 2013.

Looking for some nostalgia? Here are some Youtube videos relating to February 23rd, 2013. Please note that videos are automatically selected by Youtube and that results may vary! Click on the "Load Next Video" button to view the next video in the search playlist. In many cases, you'll find episodes of old TV shows, documentaries, music videos and soap dramas.

Here are some fun statistics about February 23rd, 2013.