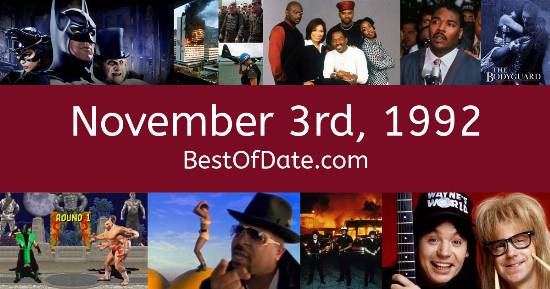 Songs that were on top of the music singles charts in the USA and the United Kingdom on November 3rd, 1992.

The date is November 3rd, 1992 and it's a Tuesday. Anyone born today will have the star sign Scorpio. Halloween has just come and passed.

It's November, so the evenings are getting darker and the days are getting colder. The song End Of The Road by Boyz II Men is on top of the singles charts in both the USA and the United Kingdom. George W. Bush Snr. is currently the President of the United States and the movie Under Siege is at the top of the Box Office.

American rock band Rage Against the Machine have just released their controversial new single "Killing in the Name". In the United States, is is election day. Voters are currently choosing between Democratic Party nominee Bill Clinton and President George H. W. Bush in the 1992 presidential election. If you were to travel back to this day, notable figures such as Audrey Hepburn, Thurgood Marshall, Andre the Giant and Bobby Moore would all be still alive.

On TV, people are watching popular shows such as "'Allo 'Allo!", "Roseanne", "Martin" and "Mad About You". Meanwhile, gamers are playing titles such as "The Simpsons: Bart vs. the Space Mutants", "Civilization", "Evander Holyfield's Real Deal Boxing" and "Super Star Wars". Children and teenagers are currently watching television shows such as "Mister Rogers' Neighborhood", "Teenage Mutant Ninja Turtles", "The Adventures of Pete & Pete" and "Goof Troop".

If you're a kid or a teenager, then you're probably playing with toys such as Micro Machines, the Ghostbusters Proton Pack, the Super Nintendo Entertainment System (SNES) and Mighty Max.

If you are looking for some childhood nostalgia, then check out November 3rd, 1998 instead.

Model / socialite.
Born on November 3rd, 1995
She was born exactly 3 years after this date.

George W. Bush Snr. was the President of the United States on November 3rd, 1992.

John Major was the Prime Minister of the United Kingdom on November 3rd, 1992.

Enter your date of birth below to find out how old you were on November 3rd, 1992.

Here are some fun statistics about November 3rd, 1992.

Have something to say about November 3rd, 1992?