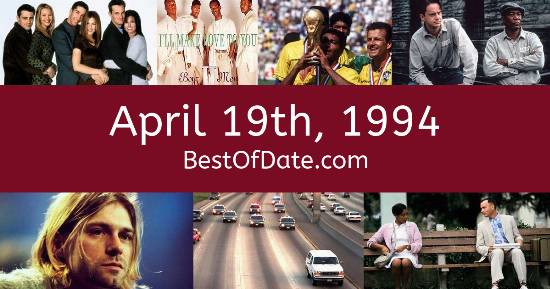 Songs that were on top of the music singles charts in the USA and the United Kingdom on April 19th, 1994.

The date is April 19th, 1994 and it's a Tuesday. Anyone born today will have the star sign Aries. The summer of 1994 is drawing closer and temperatures have started to rise.

In America, the song Bump N' Grind by R. Kelly is on top of the singles charts. Over in the UK, Everything Changes by Take That is the number one hit song. Bill Clinton is currently the President of the United States and the movie Four Weddings and a Funeral is at the top of the Box Office.

In Europe, a war is continuing to rage on in Bosnia and Herzegovina. On the continent of Africa, a horrible event is unfolding, as the Hutu majority in Rwanda attempt to wipe out the Tutsi minority. This genocide began following the assassination of President Juvenal Habyarimana. In music news, American punk rock band The Offspring have released their new album "Smash".

Singer Billy Joel and supermodel Christie Brinkley have announced that they will be separating. The couple, who have a daughter, have been married since 1985. Meanwhile, actress Roseanne Barr has filed for divorce from Tom Arnold after four years of marriage. On TV, people are watching popular shows such as "Clarissa Explains It All", "Melrose Place", "The Nanny" and "Babylon 5".

Meanwhile, gamers are playing titles such as "Syndicate", "NBA Jam", "Doom" and "Super Metroid". Children and teenagers are currently watching television shows such as "Fireman Sam", "Garfield and Friends", "Roseanne" and "Batman: The Animated Series". Popular toys at the moment include the likes of the Easy-Bake Oven, Yo-yo, Super Soaker (water gun) and Mighty Max.

A Spotify playlist of songs from the year 1994. Take a trip back to the days of Wet Wet Wet, the Cranberries, Bon Jovi and Ace of Base.

Bill Clinton was the President of the United States on April 19th, 1994.

John Major was the Prime Minister of the United Kingdom on April 19th, 1994.

Enter your date of birth below to find out how old you were on April 19th, 1994.

Leave a comment and tell everyone why April 19th, 1994 is important to you.