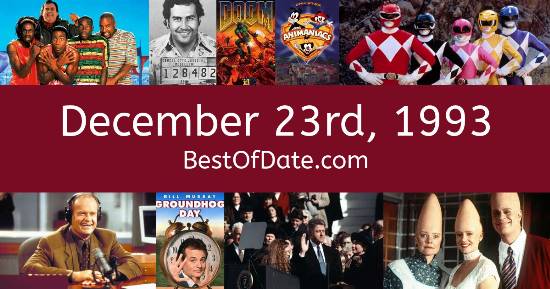 On December 23rd, 1993, the following songs were at the top of the music charts in the USA and the UK.

The top "Box Office" movie on this date was the film "Wayne's World 2".

The date is December 23rd, 1993, and it's a Thursday. Anyone born today will have the star sign Capricorn. Christmas Day of 1993 is fast approaching and the excitement is building. Department stores are thronged with Christmas shoppers.

In America, the song Again by Janet Jackson is on top of the singles charts. Over in the UK, Babe by Take That is the number one hit song. Bill Clinton is currently the President of the United States, and the movie Wayne's World 2 is at the top of the Box Office.

It's 1993, so radio stations are being dominated by the likes of Meat Loaf, UB40, Snow, Haddaway, Whitney Houston, Take That, Janet Jackson and Mariah Carey. A new first-person shooter game called "Doom" has recently been released by id Software. The films "Schindler's List" and "Philadelphia" have both made their big screen debuts.

Pop star Michael Jackson has come out an publicly denied the child molestation allegations that have been leveled against him since August. In a pre-recorded video, Jackson hit out at the claims and called them "totally false". If you were to travel back to this day, notable figures such as Bill Hicks, John Candy, Kurt Cobain and Richard Nixon would all be still alive. On TV, people are watching popular shows such as "Full House", "Star Trek: The Next Generation", "Mad About You" and "Star Trek: Deep Space Nine".

Meanwhile, gamers are playing titles such as "Street Fighter II: The World Warrior", "FIFA International Soccer", "Mario's Time Machine" and "Doom". Children and teenagers are currently watching television shows such as "Married... with Children", "Rosie and Jim", "The Ren & Stimpy Show" and "The Little Mermaid". Popular toys at the moment include the likes of the Ghostbusters Proton Pack, the Game Boy, the SEGA Game Gear and the Super Nintendo Entertainment System (SNES).

These are trending news stories and fads that were prevalent at this time. These are topics that would have been in the media on December 23rd, 1993.

News stories and other events that happened around December 23rd, 1993.

Check out our personality summary for people who were born on December 23rd, 1993.

Television shows that people were watching in December, 1993.

Popular video games that people were playing in December of 1993.

If you are looking for some childhood nostalgia, then you should check out December 23rd, 1999 instead.

Bill Clinton was the President of the United States on December 23rd, 1993.

John Major was the Prime Minister of the United Kingdom on December 23rd, 1993.

Find out what your age was on December 23rd, 1993, by entering your DOB below.
This information is not saved on our server.

Here are some fun statistics about December 23rd, 1993.