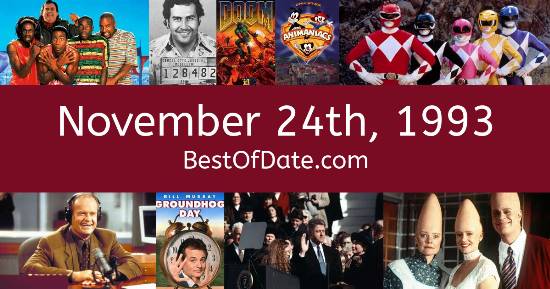 On November 24th, 1993, the following songs were at the top of the music charts in the USA and the UK.

The top "Box Office" movie on this date was the film "Addams Family Values".

The date is November 24th, 1993, and it's a Wednesday. Anyone born today will have the star sign Sagittarius. In America, it is the day before Thanksgiven Day and people are looking forward to tomorrow's dinner.

It's November, so the evenings are getting darker and the days are getting colder. The song I'd Do Anything For Love by Meat Loaf is on top of the singles charts in both the USA and the United Kingdom. Bill Clinton is currently the President of the United States, and the movie Addams Family Values is at the top of the Box Office.

In the United Kingdom, two 10-year-old boys have recently been found guilty of the abduction and murder of 2-year-old James Bulger back in February. If you were to travel back to this day, notable figures such as Frank Zappa, Bill Hicks, John Candy and Kurt Cobain would all be still alive. On TV, people are watching popular shows such as "Only Fools and Horses", "One Foot in the Grave", "Frasier" and "Walker, Texas Ranger".

Meanwhile, gamers are playing titles such as "Duck Hunt", "Road Rash II", "Sonic the Hedgehog 2" and "X-Men". Children and teenagers are currently watching television shows such as "Round the Twist", "Batman: The Animated Series", "Animaniacs" and "Tales from the Cryptkeeper". Popular toys at the moment include the likes of Cabbage Patch Kids, Sylvanian Families, Polly Pocket and Power Rangers figures.

These are trending news stories and fads that were prevalent at this time. These are topics that would have been in the media on November 24th, 1993.

Check out our personality summary for people who were born on November 24th, 1993.

If you are looking for some childhood nostalgia, then you should check out November 24th, 1999 instead.

Bill Clinton was the President of the United States on November 24th, 1993.

Enter your date of birth below to find out how old you were on November 24th, 1993.
This information is not transmitted to our server.

Here are some fun statistics about November 24th, 1993.