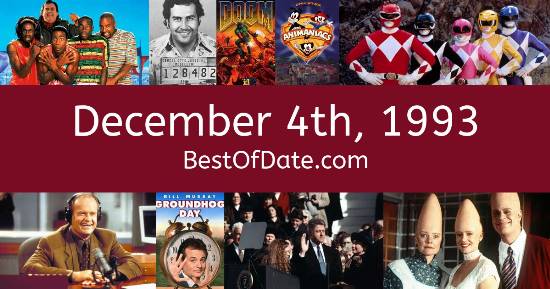 Songs that were on top of the music singles charts in the USA and the United Kingdom on December 4th, 1993.

The date is December 4th, 1993, and it's a Saturday. Anyone born today will have the star sign Sagittarius. Currently, people are enjoying their weekend.

The Christmas season of 1993 has began. The song I'd Do Anything For Love by Meat Loaf is on top of the singles charts in both the USA and the United Kingdom. Bill Clinton is currently the President of the United States, and the movie Mrs. Doubtfire is at the top of the Box Office.

Meanwhile, Hip Hop group Salt-N-Pepa have just released their new song "What a Man". Music fans are saddened by the recent death of American singer Frank Zappa. Zappa was 52 years old and had been fighting a lengthy battle with prostate cancer. In the United Kingdom, Princess Diana has announced that she is officially retiring from public life. If you were to travel back to this day, notable figures such as Frank Zappa, Bill Hicks, John Candy and Kurt Cobain would all be still alive.

Popular toys at the moment include the likes of Pogo ball / Lolo ball, Lego Pirates, Mighty Max and the Talkboy.

These are trending news stories and fads that were prevalent at this time. These are topics that would have been in the media on December 4th, 1993.

Check out our personality summary for people who were born on December 4th, 1993.

Television shows that people were watching in December, 1993.

Popular video games that people were playing in December of 1993.

If you are looking for some childhood nostalgia, then you should check out December 4th, 1999, instead.

Celebrities, historical figures, and other notable people who were born on December 4th.

Love Island contestant.
Born on December 4th, 1996
She was born exactly 3 years after this date.

Bill Clinton was the President of the United States on December 4th, 1993.

Enter your date of birth below to find out how old you were on December 4th, 1993.
This information is not transmitted to our server.

Here are some fun statistics about December 4th, 1993.