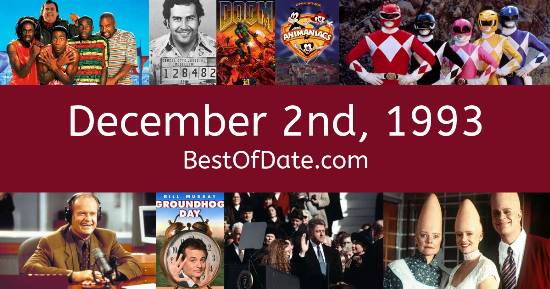 Songs that were on top of the music singles charts in the USA and the United Kingdom on December 2nd, 1993.

The movie "Addams Family Values" was at the top of the box office on December 2nd, 1993.

The date is December 2nd, 1993 and it's a Thursday. Anyone born today will have the star sign Sagittarius. The song I'd Do Anything For Love by Meat Loaf is on top of the singles charts in both the USA and the United Kingdom.

Bill Clinton is currently the President of the United States and the movie Addams Family Values is at the top of the Box Office. In the United Kingdom, John Major is the current Prime Minister. In fashion, many of the trends from the late 80s are still in vogue. Colored tights, denim overalls, leotards, flannel shirts and shoulder pads are all fashionable at the moment. Grunge fashion has also become mainstream, popularizing band t-shirts, ripped jeans, mom jeans and Doc Martens.

In the United Kingdom, two 10-year-old boys have recently been found guilty of the abduction and murder of 2-year-old James Bulger back in February. In Medellin, Colombia, drug lord Pablo Escobar has been killed by a special operations unit called Search Bloc. Escobar had been on the run from authorities since his escape from La Catedral prison earlier this year. Meanwhile, Hip Hop group Salt-N-Pepa have just released their new song "What a Man".

On TV, people are watching popular shows such as "Married... with Children", "One Foot in the Grave", "X-Men" and "Dr. Quinn, Medicine Woman". Meanwhile, gamers are playing titles such as "Duck Hunt", "Street Fighter II: The World Warrior", "Myst" and "Disney's Aladdin". Children and teenagers are currently watching television shows such as "Roseanne", "Rosie and Jim", "Home Improvement" and "Bill Nye the Science Guy".

Popular toys at the moment include the likes of Polly Pocket, Yo-yo, G.I. Joe (figures) and Action Man.

If you are looking for some childhood nostalgia, then check out December 2nd, 1999 instead.

Celebrities, historical figures and notable people who were born on the 2nd of December.

Bill Clinton was the President of the United States on December 2nd, 1993.

John Major was the Prime Minister of the United Kingdom on December 2nd, 1993.

Enter your date of birth below to find out how old you were on December 2nd, 1993.

Here are some fun statistics about December 2nd, 1993.

Have something to say about December 2nd, 1993?