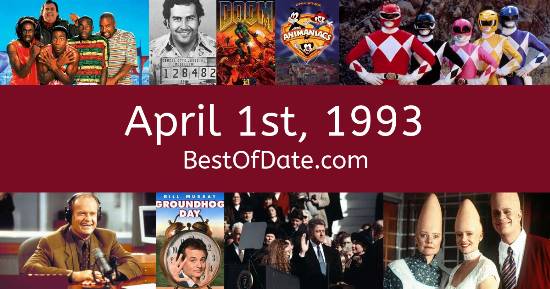 Songs that were on top of the music singles charts in the USA and the United Kingdom on April 1st, 1993.

The movie "Teenage Mutant Ninja Turtles III" was at the top of the box office on April 1st, 1993.

The date is April 1st, 1993 and it's a Thursday. Anyone born today will have the star sign Aries. It is April Fool's Day, which means that people are playing practical jokes on one another.

The summer of 1993 is drawing closer and temperatures have started to rise. In America, the song Informer by Snow is on top of the singles charts. Over in the UK, Oh Carolina by Shaggy is the number one hit song.

Bill Clinton is currently the President of the United States and the movie Teenage Mutant Ninja Turtles III is at the top of the Box Office. In the United Kingdom, John Major is the current Prime Minister. A civil war is currently taking place in the African country of Rwanda.

In Ireland, American woman Annie McCarrick has recently gone missing under suspicious circumstances. The New York Times has recently published Kevin Carter's photograph of a starving child being stalked by a vulture in Sudan. There have been strong reactions to the image and a lot of people are currently donating money to humanitarian organizations. In France, Édouard Balladur has been elected as the new Prime Minister.

The 65th Academy Awards have just been held in Los Angeles. The western film "Unforgiven" (1992) has won "Best Picture", while Al Pacino (Scent of a Woman) and Emma Thompson (Howards End) have both picked up the top award for their acting performances. Tributes are pouring in for actor Brandon Lee, who has tragically passed away at the age of 28. Lee died after he was accidentally shot while filming a scene for the movie "The Crow". On TV, people are watching popular shows such as "Family Matters", "The Fresh Prince of Bel-Air", "Clarissa Explains It All" and "Martin".

Meanwhile, gamers are playing titles such as "Duck Hunt", "Desert Strike ", "Wolfenstein 3D" and "Sonic the Hedgehog 2". Children and teenagers are currently watching television shows such as "Blossom", "The Fresh Prince of Bel-Air", "The Ren & Stimpy Show" and "Batman: The Animated Series". Popular toys at the moment include the likes of Jenga, the Ghostbusters Proton Pack, Pogs and Teen Talk Barbie.

If you are looking for some childhood nostalgia, then check out April 1st, 1999 instead.

Youtuber.
Born on April 1st, 1995
He was born exactly 2 years after this date.

Bill Clinton was the President of the United States on April 1st, 1993.

John Major was the Prime Minister of the United Kingdom on April 1st, 1993.

Enter your date of birth below to find out how old you were on April 1st, 1993.

Here are some fun statistics about April 1st, 1993.