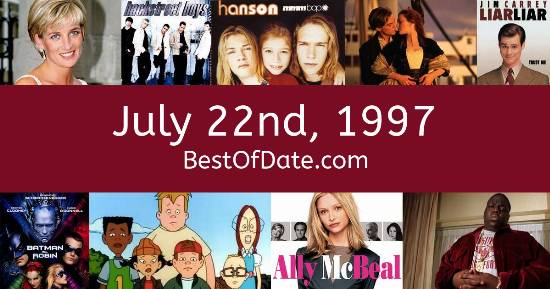 Songs that were on top of the music singles charts in the USA and the United Kingdom on July 22nd, 1997.

The date is July 22nd, 1997 and it's a Tuesday. Anyone born today will have the star sign Cancer. It's summer, so the temperatures are warmer and the evenings are longer than usual.

The song I'll Be Missing You by Puff Daddy & Faith Evans is on top of the singles charts in both the USA and the United Kingdom. Bill Clinton is currently the President of the United States and the movie Men in Black is at the top of the Box Office. In the United Kingdom, Tony Blair is the current Prime Minister.

On TV, people are watching popular shows such as "Mad About You", "Xena: Warrior Princess", "3rd Rock from the Sun" and "Sabrina, the Teenage Witch". Meanwhile, gamers are playing titles such as "Fade to Black", "Wipeout 2097", "Diablo" and "Theme Hospital". Children and teenagers are currently watching television shows such as "Home Improvement", "Living Single", "Aaahh!!! Real Monsters" and "Hey Arnold!".

Popular toys at the moment include the likes of Sylvanian Families, Super Soaker (water gun), the Tamagotchi and Bop It.

If you are looking for some childhood nostalgia, then check out July 22nd, 2003 instead.

Celebrities, historical figures and notable people who were born on the 22nd of July.

Bill Clinton was the President of the United States on July 22nd, 1997.

Tony Blair was the Prime Minister of the United Kingdom on July 22nd, 1997.