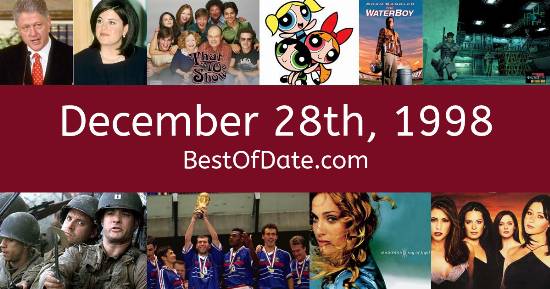 December 28th, 1998 relates to an event in a movie, book, game or television series:

Songs that were on top of the music singles charts in the USA and the United Kingdom on December 28th, 1998:

The date is December 28th, 1998 and it's a Monday. Anyone born today will have the star sign Capricorn. Christmas Day of 1998 has just passed and many people are relaxing at home and enjoying the holiday season.

In America, the song I'm Your Angel by R. Kelly & Celine Dion is on top of the singles charts. Over in the UK, Goodbye by Spice Girls is the number one hit song. Bill Clinton is currently the President of the United States and the movie Patch Adams is at the top of the Box Office.

A musical subgenre called "Nu metal" is beginning to take off, aided by the success of bands such as Korn. US President Bill Clinton is being impeached for lying under oath and obstruction of justice. The Furby craze has started, with over 1.8 million units being sold throughout the Christmas season.

People are watching popular TV shows such as "Rugrats", "Recess", "Two Guys, a Girl and a Pizza Place" and "The Powerpuff Girls". Meanwhile, gamers are playing titles such as "Tenchu: Stealth Assassins", "Tom Clancy's Rainbow Six", "Spyro the Dragon" and "The Legend of Zelda: Ocarina of Time". Children and teenagers are currently watching television shows such as "The Simpsons", "Hang Time", "Daria" and "City Guys".

Celebrities, historical figures and noteable people that were born on the 28th of December:

Who was the Prime Minister of the United Kingdom on December 28th, 1998?

Enter your date of birth below to find out how old you were on December 28th, 1998.

Looking for some nostalgia? Here are some Youtube videos relating to December 28th, 1998. Please note that videos are automatically selected by Youtube and that results may vary! Click on the "Load Next Video" button to view the next video in the search playlist. In many cases, you'll find episodes of old TV shows, documentaries, music videos and soap dramas.

Here are some fun statistics about December 28th, 1998.